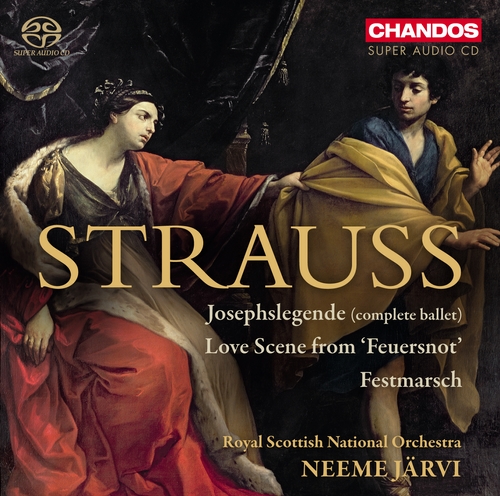 Josephslegende, Op. 63, TrV 231 (1912 – 14) Action in One Act - by Harry Graf Kessler and Hugo von Hofmannsthal
Love Scene from ‘Feuersnot’, Op. 50, TrV 203 (1900 – 01)
Festmarsch, Op. 1, TrV 43 (1876) - in E flat major, in Es-Dur, en mi bémol majeur
This Super Audio CD features works by Strauss performed by the Royal Scottish National Orchestra under Neeme Järvi, who in 2012 celebrated his thirty-year recording career with Chandos Records. The Josephslegende, premiered in 1914, is a ballet based on the Biblical tale of the adventures of Joseph in Egypt after he had been sold into slavery by his brothers. Upon starting work on the score Strauss found himself quickly bored with the character of the ‘chaste’ ‘God-seeker’ Joseph and showed far more interest in the sexual element of the story, in which Potiphar’s wife attempts to seduce Joseph and ends up committing suicide. Sexual themes remain prevalent in the Love Scene from Strauss’s satirical second opera, Feuersnot. In this dramatic closing scene the young Diemut sacrifices her virginity to release a spell that threatens her town. At the time of the premiere the sexual nature of the work and its progressive musical language were deeply shocking. Completing the disc is a piece of entirely different character, written when Strauss was only twelve years old. The Festmarsch, Op. 1 was Strauss’s first published orchestral work, launched by Strauss’s own father in a concert given by his amateur orchestra in 1881.