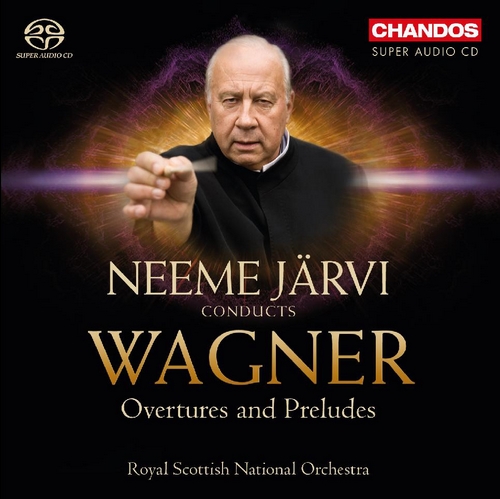 Overture to ‘Die Feen’
Overture to ‘Columbus’
Overture to ‘Rienzi, der Letzte der Tribunen’
Overture to ‘Das Liebesverbot’
Eine Faust-Ouvertüre (rev. 1855)
Overture to ‘Der fliegende Holländer’
Prelude to Act III of ‘Lohengrin’
Prelude to ‘Tristan und Isolde’
Prelude to ‘Die Meistersinger von Nürnberg’
On this disc we bring together some of the highlights from Neeme Järvi’s five-volume Wagner series with the Royal Scottish National Orchestra. As an added bonus, we have included the Overture to Der fliegende Holländer, a piece not before released. Among Wagner’s most revolutionary scores is the tragic-romantic opera Tristan und Isolde. The key themes of anticipation, longing, rapture, separation, hope, death, and transfiguration are suggested already in the famous Prelude to the opera, recorded here. The Overture to Rienzi, Wagner’s third completed opera (1838 – 40), incorporates the melody of Rienzi’s prayer at the start of Act V, which since became the opera’s best-known aria, and ends with a dazzling military march. Die Feen was the composer’s first great romantic, although less well-known, opera. The overall style of the work, based on La donna serpente by Carlo Gozzi, owes its essentials to Beethoven, Marschner, and Weber. Wagner based Das Liebesverbot on Shakespeare’s Measure for Measure. It is perhaps the most Mediterraneansounding of his operas, something especially apparent in the brimming vitality of the Overture with its sparkling contributions of castanets, triangle, and tambourine. ‘Rollicking good fun’ wrote American Record Guide of this piece. Also enriching the disc are the Prelude to Die Meistersinger von Nürnberg, the Prelude to Act III of Lohengrin, and the seldom performed and recorded, Weber-inspired Overture which Wagner wrote in 1835 for the play Columbus by Theodor Apel. Eine Faust-Ouvertüre followed in 1840. Taking its inspiration from Goethe’s famous play, this work, together with Hector Berlioz’s Symphonie fantastique, became the main example of nineteenth-century programme music.