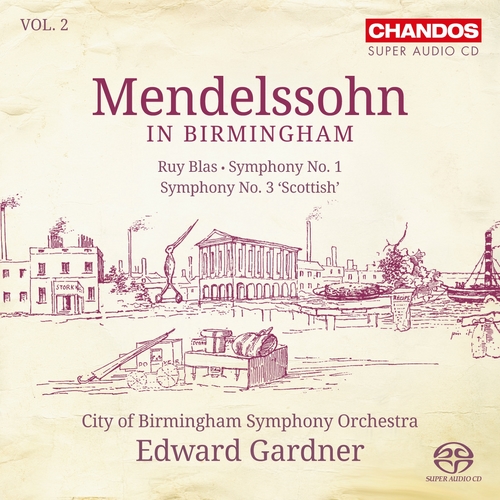 Symphony No. 1
Symphony No. 3
Overture to ‘Ruy Blas’
Edward Gardner and the CBSO present volume 2 in their series Mendelssohn in Birmingham, this time performing Symphonies Nos. 1 and 3 and the Overture Ruy Blas. The impressive first volume was roundly praised, IRR commending the ‘powerfully engaging and alert performances’ while the Sunday Times made it their ‘Album of the Week’.

Among the fruits of his prodigiously gifted youth were thirteen string symphonies, which Mendelssohn composed privately as ‘practice’ pieces. At age fifteen he returned to the last of these, expanded the orchestration and published it as the first of his mature numbered symphonies. As heard here, this energetic work, bursting with youthful high spirits, shows the influence of Mozart, Beethoven, and Weber, but that influence is always absorbed in a personal way.

Although numbered as the third of five, the ‘Scottish’ Symphony was actually the last which Mendelssohn composed. Inspiration for it had come while Mendelssohn was visiting Edinburgh in 1829. He was immediately moved to compose the brooding melody that begins and ends the work, but not until 1842 did he actually finish this masterpiece.

No such time span was needed to complete the Overture to Victor Hugo’s tragedy Ruy Blas, which was commissioned only three days before the production’s opening night. Mendelssohn loathed Hugo’s drama and though the opening is suitably sombre, the rest of the overture disregards the play’s form and character, concluding in celebration where Hugo’s story culminates in murder and suicide.