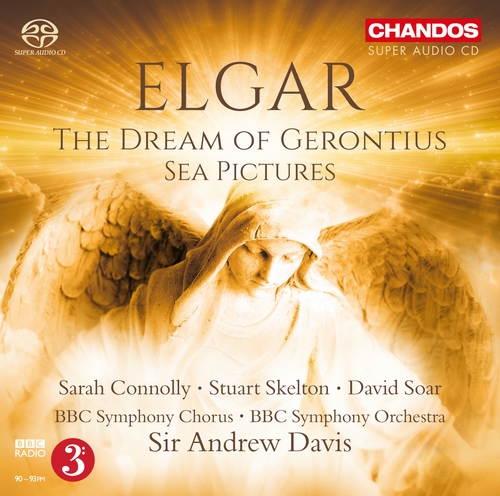 Elgar: The Dream of Gerontius

The Dream of Gerontius
Sea Pictures
Chandos Records is delighted to present this new recording of Elgar’s choral masterpiece The Dream of Gerontius and the enduringly popular song cycle Sea Pictures. The BBC Symphony Orchestra and Chorus are conducted by Sir Andrew Davis, a peerless Elgarian who this year was awarded the prestigious Elgar Society Medal in recognition of his outstanding contribution to the composer’s music. In Gerontius the soloists are Stuart Skelton, David Soar and Sarah Connolly, who also sings in Sea Pictures. This recording was made in the days leading up to their triumphant live performance of Gerontius in April of this year in which Skelton was praised as ‘the ideal tenor for the role of Gerontius’, Soar described as ‘an implacable, dark-sounding Priest’ and Connolly, ‘a consummately polished Angel’ (The Guardian).

Elgar’s Dream of Gerontius was commissioned in 1900 for that year’s Birmingham Festival. The score was produced in a hurry but Elgar had long before known the text which the work sets, Cardinal Newman’s religious poem that powerfully recounts the final dream of a dying believer and the journey of his soul through death. The performers struggled with Elgar’s score at the disastrous premier but this did nothing to stop the immediate popularity of The Dream of Gerontius. It is recognised today by many as the greatest choral work by any English composer.

Written not long before Gerontius, Sea Pictures sets a collection of poetry by different authors all on a single theme. Inspired by his love of nature, Elgar’s songs explore the emotional resonances of the sea, from serene still waters to a mighty ocean storm.