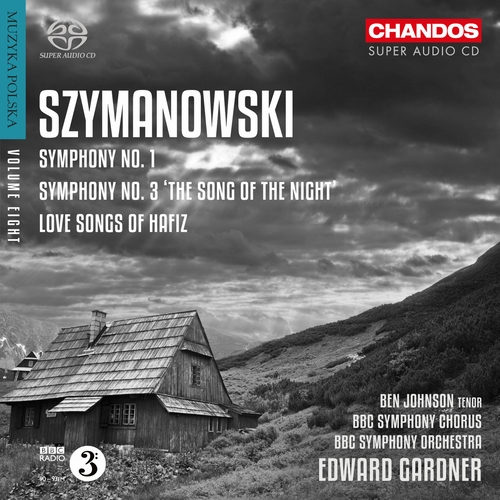 Symphony No.1
Love Songs of Hafiz, Op.26*
Symphony No.3, Op.27#
Edward Gardner returns with the BBC Symphony Orchestra to the intoxicating orchestral music of Karol Szymanowski in their third disc devoted to the composer. Their previous releases have been widely praised, Gardner being described in BBC Music Magazine as ‘one of the finest non-Polish interpreters of Szymanowski.’ Ben Johnson, a tenor whose star is rapidly rising, joins Gardner and the BBC SO here as a soloist in two works.

Szymanowski’s Symphony No. 1 was composed in 1907 while he was still in his twenties. Stylistically it belongs to his early period, heavily influenced by the late-Romantic style of Wagner and Strauss. It was disavowed later in life as Szymanowski rejected his early influences but its brash youthful energy and intense emotion has won many audiences over.

The exquisite Love Songs of Hafiz for tenor soloist and orchestra are transitional works. Composed in 1911, they represent a move toward his middle period marked by a fascination with oriental themes, here reflected in the choice to set 14th Century Persian poetry.

Szymanowski’s Symphony No. 3 ‘Song of the Night’ is considered the apex of his middle-period output and one of his finest works. Scored for a huge orchestra with choir and tenor soloist, Szymanowski again sets Persian poetry, here celebrating the beauty of the starlight Eastern night. Szymanowski conveys the poem’s vision with sensuous and highly emotional music, scored in extraordinarily subtle orchestral colour.