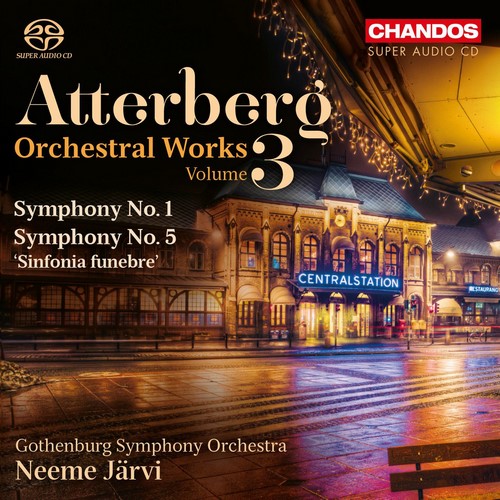 Symphony No. 1 in B minor, Op. 3
Symphony No. 5 in D minor, Op. 20
‘Sinfonia funebre’
Neeme Järvi and the Gothenburg Symphony Orchestra continue their Atterberg survey with this third volume of symphonies. Atterberg’s music will be in the spotlight this summer with the celebration surveying Nordic composers Nielsen and Sibelius.

Atterberg sent the first three completed movements of his Symphony No. 1 to Stockholm’s Royal Academy, seeking a scholarship in order to travel to several cities in Germany to attend musical performances. When he came back he added a finale with an introductory Adagio in which he, as it were, ‘reminded’ himself of what he had already composed. The first performance of the symphony, in 1912 – also Atterberg’s first concert as a conductor – was warmly welcomed although the work was thought very modern; six months later it became the first of Atterberg’s works to be played abroad.

Atterberg also conducted the premiere of his Symphony No. 5, which gets its title ‘Funebre’ from the slow, tragic second movement, particularly an elegiac motive in the first theme. The movement is a sort of lament over his unaccomplished early dreams and hopes. Atterberg made several revisions to this work, even rewriting the last movement twenty-five years later, and it is the revised version that has been recorded here.