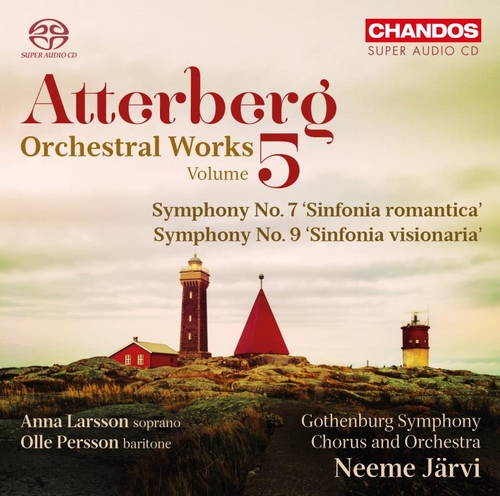 Symphony No. 7, Op. 45 Sinfonia romantica
Symphony No. 9, Op. 54 Sinfonia visionaria*
The final volume in our Atterberg series with Neeme Järvi and his Gothenburg Symphony Orchestra is finally out. Recorded on SACD like most of the previous ones, it features two late, again rarely performed symphonies.

The seventh, featured here in its final, threemovement form, was written in 1942, fourteen years after its famous predecessor, the Dollar Symphony. Originally in four movements, the work was received dismissively by the critics, and only acquired its final shape in 1969, when Atterberg decided to tear out the last movement from the original score (it became Vittorioso, see Vol. 4). In response to what he regarded as a critical insult, he also decided to baptise the work Sinfonia romantica, just to infuriate the modernistically inclined critics even further.

The composer himself referred to his Ninth and last Symphony as ‘evil’. Setting parts of the Old Icelandic poem Völuspá, it recounts indeed how evil came into the world and how it in the end will lead to total destruction. By this time he had become a very conservative composer, rejecting atonality and dodecaphony. Composed in 1955 and 1956, during a period of much administrative travel in Europe, it is one of his longest works, yet structured as a single movement in large-scale rondo form.