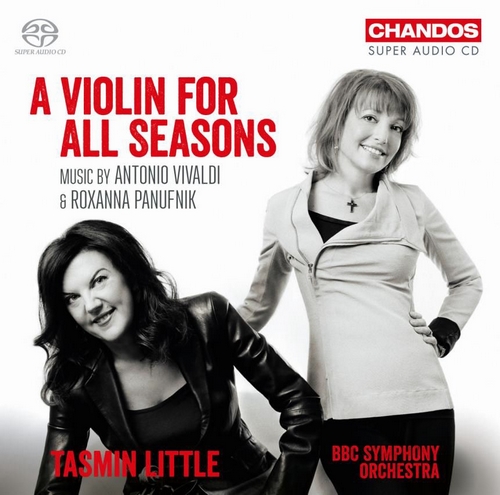 Vivaldi / Panufnik: A Violin for all Seasons

Roxanna Panufnik:
Four World Seasons (2007 – 11):
Autumn in Albania
Tibetan Winter
Spring in Japan
Indian Summer
Encapsulating the voluptuous sound of the BBC SO’s strings, Tasmin Little is both the soloist and conductor in this unique coupling: Vivaldi’s ever-popular ‘Four Seasons’ meets Roxanna Panufnik’s Four World Seasons, the premiere recording of a set of highly inspirational pieces. As a complete cycle, ‘The Four Seasons’ offers a set of vivid tableaux, imaginative, enticing, and wonderfully contrasted, with ample chance for the violin soloist to display technique, sensitivity, and colour. These are qualities that the British composer Roxanna Panufnik also sought for her own Seasons tribute, Four World Seasons, written for the violinist. Three of the pieces are dedicated to her, while the fourth, ‘Autumn in Albania’, is dedicated to the memory of Panufnik’s father, the Polish composer Sir Andrzej Panufnik, who, his daughter says, was born, loved, and died in autumn.