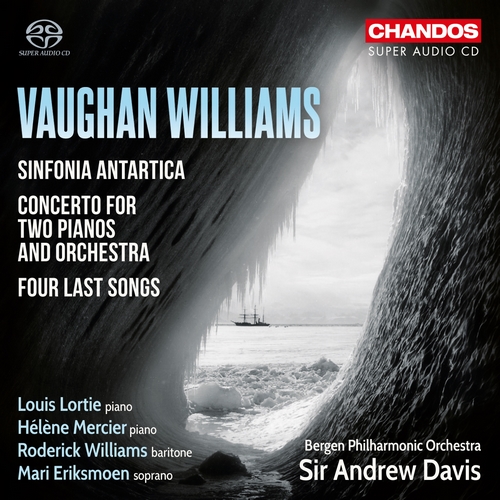 Sinfonia Antartica (No. 7)
Four Last Songs (orch. Anthony Payne)
Concerto for Two Pianos and Orchestra
This is the eagerly awaited final volume in our historic series of Vaughan Williams’s Symphonies, started about twenty-five years ago by the late Richard Hickox, and recently continued by that other expert in British repertoire, Sir Andrew Davis.

The album features an exceptional cast and a rare combination of repertoire. While the indefatigable piano duo Louis Lortie and Hélene Mercier tackle the virtuosic Double Piano Concerto, the baritone Roderick Williams OBE offers breathtaking interpretations of the rarely heard, yet passionate Four Last Songs, in Anthony Payne’s delicate and imaginative orchestration, premiered at the BBC Proms only four years ago. Vaughan Williams based the disc’s centrepiece, the majestic Sinfonia Antartica, on music he had written for the film Scott of the Antarctic only a few years before, stunningly evoking the implacable, frozen landscape of the Antarctic.

All are supported by the impeccable Bergen orchestra and choirs and recorded in surround-sound. This album is a very special one, as is the now complete series.
Recording: Grieghallen, Bergen, Norway, 30 January – 2 February 2017