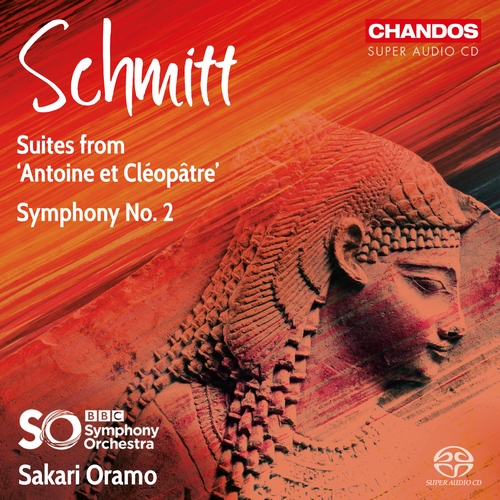 The recording follows two exceptional Barbican performances with the same forces, a ‘sensuous and exotic’ Antoine et Cléopâtre, according to the Financial Times (2016), and the first performance for nearly a dozen years of Symphony No. 2 (2017).

The Second Symphony, the last major work by Schmitt, has nothing valedictory about it: as lavish and rhythmically sophisticated as his earlier music, emphatically bounding in fast passages and supple in slow, it also encompasses all the different musical expressions and styles that he had used over almost eight decades of composing. On the other hand, it is far from being an ‘old man’s piece’. ‘It is really exuberant very, very inventive, and incredibly busy for everyone’, as Sakari Oramo explained in a BBC Radio 3 interview.

The symphony is paired with the two orchestral suites from Antoine et Cléopâtre, music written for Shakespeare’s play, premiered in 1920 at the Paris Opéra, and very rarely recorded since then.
Recording: Watford Colosseum; 29 and 30 October 2017