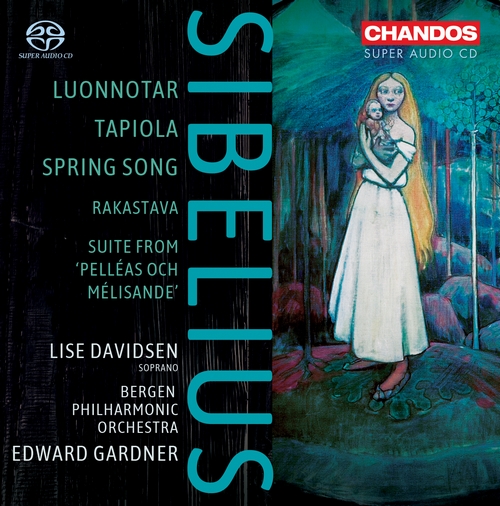 Luonnotar, Op. 70
Tapiola, Op. 112
Pelléas and Mélisande, Op. 46
Rakastava (The Lover), Op. 14
Varsang (Spring Song), Op. 16
Following their acclaimed recordings of Schoenberg with Sara Jakubiak and Britten’s Peter Grimes with Stuart Skelton, Edward Gardner and the Bergen Philharmonic turn their attention to the music of Sibelius. Written in 1913 for the diva Aino Ackté, the tone poem Luonnotar draws on text from the Finnish national epic poem, the Kalevala. Its virtuosic demands are ably met here by award-wining soprano Lise Davidsen, who also feature in the Suite from Pelléas and Mélisande, music reworked by Sibelius from his incidental music written for the first performances of Maeterlinck’s play in Helsinki, in 1905, in Swedish. The tone poem Tapiola, from 1926, is Sibelius’ last great masterpiece and evokes the forests of his native Finland. The programme is completed by a pair of much earlier works, Rakastava (the Lover) and Varsang (Spring Song). The album was recorded in Surround Sound and is available as a hybrid SACD.
Recording: Grieghallen, Bergen, Norway; 7 – 9 May 2018 (Luonnotar, Pelléas och Mélisande, Varsang) and 16 – 19 February 2021 (other works).