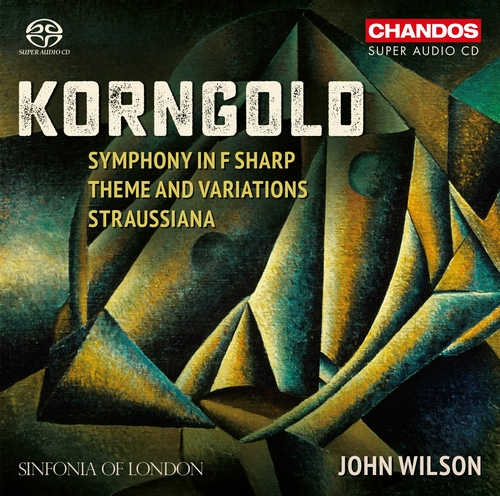 Symphony in F sharp major, Op.40
Theme and Variations, Op. 42
Straussiana
Best known as a composer of film music, Korngold was born in Brünn, Austria-Hungary (present-day Brno, Czech Republic) and – as both a pianist and composer – was a child prodigy. Mahler and Strauss were impressed by the young musician, and recommended he study with Zemlinsky rather than ‘waste his time’ attending music conservatory. Korngold emigrated with his family to the USA in 1934, where he went on to revolutionise the Hollywood soundtrack, composing scores for films such as The Sea Hawk, Captain Blood, and The Adventures of Robin Hood.

Composed between 1947 and 1952, and dedicated to the memory of Franklin Delano Roosevelt, his (only) symphony is a heartfelt response to the conflict of WWII. The premiere, in 1954 in Vienna, was under-rehearsed and not a success, and the work remained neglected until Rudolph Kempe came across a set of score and parts in Munich and resurrected it.

The Theme and Variations and Straussiana were both commissioned by the Association of American School Orchestras, but Korngold makes no concessions to youth in his writing. Straussiana also reflects his lifelong love of the music of Johan Strauss II.

This is the first recording with John Wilson and his new orchestra, the Sinfonia of London (see separate press release). The hand-picked players represent the cream of London’s orchestral musicians, and create an outstanding quality of sound that is evident throughout this exceptional recording.
Recording: Church of S. Augustine, Kilburn, London; 14 – 16 January 2019