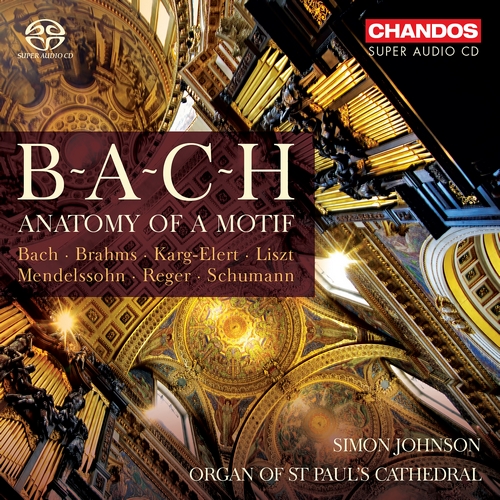 Sigfrid Karg-Elert:
Passacaglia and Fugue on B-A-C-H in B flat minor, Op. 150
In musical notation in Germany, the letter ‘h’ is used to represent the note b natural. So, the name ‘Bach’ forms an elegant phrase of two pairs of falling semitones. This proved an inspiration to Johann Sebastian, whose musical ‘signature’ appears again and again throughout his extensive output. Two shining examples are included on this album – the ‘unfinished fugue’ Contrapunctus XIV a 4 from Die Kunst der Fuge (as completed by Lionel Rogg) and the exquisite Ricercar a 6 from Musikalisches Opfer. Bach’s signature – as well as musical invention – has directly influenced scores of other composers down the years, as evidenced by the works included here, from Mendelssohn to Karg-Elert.

The organist and, from 2008 until 2021, Assistant Director of Music at St Paul’s Cathedral, Simon Johnson has used his knowledge and insight to construct this programme to demonstrate the extraordinary range and scope of the cathedral’s organ. Expertly recorded by the Chandos technical team, this album provides an outstanding testament to this fine instrument and to the unique acoustic of the world-renowned cathedral in which it sits. Recorded in surround-sound and available as a Hybrid SACD.
Recording: St Paul’s Cathedral, London; 31 May – 4 June 2021. The original organ was built by Bernard Schmidt (‘Father’ Smith) in 1697, it was reconstructed to its present layout in the chancel by Henry (‘Father’) Willis in 1872.