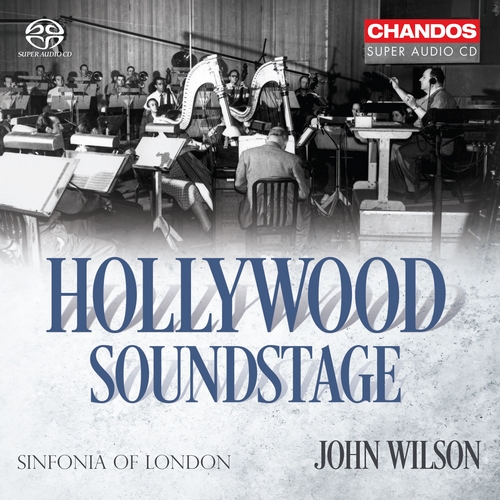 Erich Wolfgang Korngold:
Overture from ‘The Private Lives of Elizabeth and Essex’

Herbert Stothart/Harold Arlen:
Suite from ‘The Wizard of Oz’

Alfred Newman:
Street Scene from ‘How to Marry a Millionaire’
S infonia of London and John Wilson present an album that celebrates the golden age of Hollywood. Sinfonia of London rose to fame in the 1950s as the leading recording orchestra of the day, appearing in the musical credits of more than 300 films, including the 1958 soundtrack by Bernard Herrmann for Hitchcock’s Vertigo. It was reformed by John Wilson in 2018, initially as a recording orchestra, and is made up of some of Europe’s finest orchestral musicians. Their recording of Korngold’s Symphony in F sharp won the orchestral award of the magazine BBC Music and drew critical acclaim worldwide. The Overture from The Private Lives of Elizabeth and Essex, which opens this latest programme, is an excellent demonstration of Korngold’s rich, chromatic soundworld, one that set the blueprint for the Hollywood sound for countless composers who followed.

Although the songs were written by Harold Arlen, it was Herbert Stothart’s score for The Wizard of Oz that won the Oscar, and it is his suite from the movie that features here. There are also Suites from Max Steiner’s Now, Voyager and Franz Waxman’s Rebecca (here receiving its premiere recording). Shorter pieces by David Raksin, Frederick Loewe, Johnny Mandel, and Alfred Newman complete this rewarding programme.
Recording: Church of S. Augustine, Kilburn, London; 6 – 8 September 2021. Recorded in Surround Sound, and released as a Hybrid SACD.