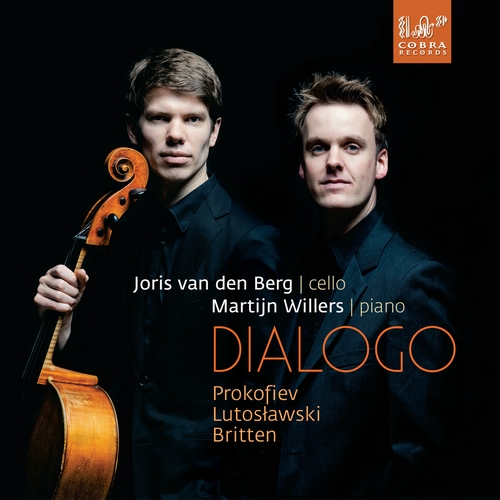 Britten:
Sonata for cello and piano in C major, Op. 65

This CD represents the dialogue in all its forms: An intense conversation between two outstanding musicians, constantly challenging and inspiring one another, reaching new heights in that process; a dialogue between musicians and audience, the wonderful experience of sharing incredible music together; and finally, the dialogue between musician and composer, a fascinating process which the two sonatas on this CD demonstrate perfectly.

Benjamin Britten’s cello sonata is bursting with fantastic techniques and effects in which cello and piano are constantly in active conversation. This sonata was written for the great cellist Mstislav Rostropovich. Sergei Prokofiev also wrote his sonata for this great cellist, but with quite a different result. In this sonata we find the real romantic Prokofiev: beautiful colours and enchanting fairy tale-like melodies. The third piece, Grave, by the Polish composer Lutoslawski was written ‘in memoriam’ for Stephan Jarocinski, musicologist and a close friend of Lutoslawski’s. Joris van den Berg and Martijn Willers were prize winners at the Amsterdam Cello Biënnale, the Johannes Brahms Chamber Music Competition in Austria and the Pierre Fournier Award in London.

As laureates of Dutch Classical Talent Tour & Award they will perform in 11 of the most important concert halls of The Netherlands from October 2013. In summer 2014 Van den Berg and Willers will make a big concert tour in China. The duo is widely acclaimed for its sincere and intense performances of the cello and piano repertoire.