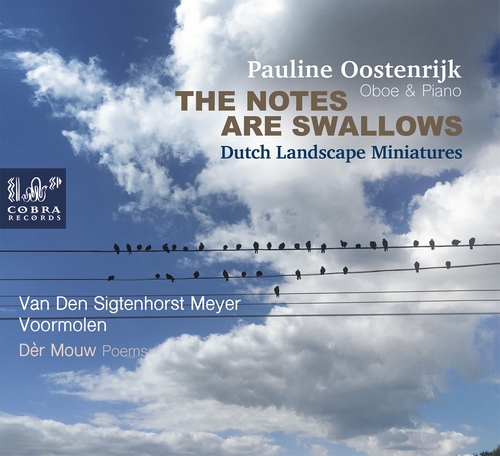 Alexander Voormolen:
Children’s book I & II
Tableaux des Pays-Bas
Pastorale
The Notes Are Swallows is a surprising and touching collection of forgotten landscape miniatures in Dutch music and poetry. With this project, a longcherished wish comes true for Pauline Oostenrijk: to combine her love for the oboe, the piano, Dutch music, Dutch literature and Dutch landscape.

First of all, this CD brings the complete oeuvre for oboe solo by Dutch composer Bernhard van den Sigtenhorst Meyer (1888-1953) out of the shadows. These atmospheric, colourful and meditative compositions were mostly written for Jaap Stotijn and his son Haakon Stotijn, both icons of the legendary Dutch Oboe School. Pauline Oostenrijk, who is considered to be the last Dutch oboe soloist cherishing this tradition of a songful, expressive and clear voiced oboe sound, is the designated person to record this repertoire.

Being a pianist as well as an oboist, Pauline is delighted to be able to alternate these oboe pieces with some completely unknown early piano works of the same composer: musical portraits of flowers and birds that perfectly match the rustic atmosphere of the oboe pieces. The musical collection is completed with a few piano works of Dutch composer Alexander Voormolen (1895-1980), with titles as The tiny fish and The first swallow. And because Pauline felt that Voormolen’s Pastorale for oboe and piano shouldn’t be omitted on this CD full of landscape music, she decided to enjoy, for once, the experience of playing as an oboist together with herself as a pianist.

Since completing her study Dutch Language and Culture at a later age, she has felt the strong desire to connect Dutch music and Dutch literature. For this she chose the poems of Dutch poet Johan Andreas der Mouw (1863- 1919); in an unparalleled manner, his sonnets describe landscapes, nature and animals and express the deeply felt wonder and stillness that nature can evoke. A selection of eleven poems together with their beautiful translations into English by John Irons have been chosen to be printed in the booklet. A unique opportunity to combine these musical and poetic representations of the Dutch landscape, which complement and reinforce each other so wonderfully, and present them to an international audience!

In 1999 Pauline Oostenrijk received the Netherlands Music Prize, which is the highest State Award for classical music. Before that, she had already won a number of prizes, among which the first prize in the Fernand Gillet oboe competition in Baltimore, resulting in a recital in Carnegie Hall. From 1993 till 2018, she was principal oboist of the Residentie Orchestra in The Hague. Her activities as a soloist and chamber musician have been recorded on a considerable number of CDs which earned international acclaim and received outstanding critics. Currently, Pauline Oostenrijk plays recitals with guitarist Enno Voorhorst, is a member of the Orlando Quintet and often performs with the The Hague String Trio. Since 2018 she teaches oboe at the Prince Claus Conservatory in Groningen.
Recording: Westvest90-church, Schiedam, The Netherlands, June 11 & 12, 2019 and Koepelkerk, Renswoude, The Netherlands, August 22 & 24, 2019