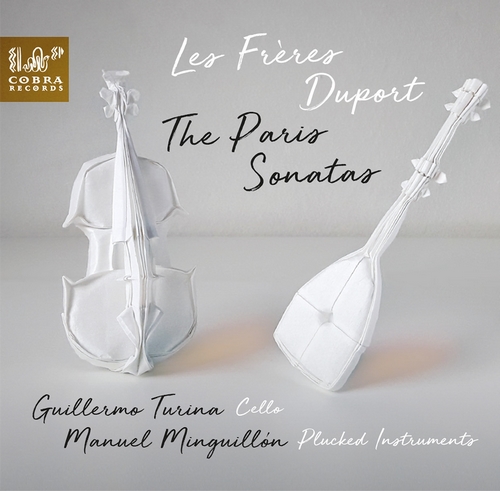 Sonata I, Op. 2
Sonata IV, Op. 2
Sonata V, Op. 2
Sonata I, Op. 1
Sonata II, Op. 2
Sonata III, Op. 2
The music on this album is of the French brothers Jean-Pierre Duport (1741-1818) and Jean-Louis Duport (1749-1819). The brothers were both brilliant cellists and two of the most important musicians of their time who revolutionized the performance of the cello, their influence has been decisive for the place the cello occupies nowadays. The Duport brothers had immediate success after their respective debuts in 1761 and 1768 at the Concert Spirituel organized in the Tuileries Palace in Paris. Hereafter they started traveling separately and both achieved great success in the English and German music scene. It was in Germany where their lives and the history of the cello would change forever. In 1786 Jean-Pierre was named superintendent of music at the court of Prussia with the accession of Frederick William II to the throne. Jean-Louis joined his brother in 1789 and was appointed first cellist of the court. The flourishing and musical quality of that court, together with the monarch’s interests, made the best musicians visit it and compose for the Duport brothers. Such as Haydn and Mozart and their Prussian Quartets, and Beethoven who wrote his sonatas Op.5 to play with them. These were the first sonatas for cello and piano in the history of music. Jean-Pierre stayed in Germany and worked for the Prussian court until his death. Jean-Louis travelled back to Paris in 1807 where he was in 1812 appointed cello professor at the conservatoire, which he stayed until his death.

Thanks to their constant work and effort to improve their technique the Duport brothers left a legacy: the origin of the Romantic cello, not only through the evolution of the works they wrote themselves, but also thanks to the ones other musicians wrote for them. All the music selected for this album has never been recorded before; it is of the Duport brothers’ youth years which was published in Paris. Some of these sonatas might have even been played in their first concert in the Tuileries Palace in Paris. The sonatas by Jean- Pierre are part of his first two books, published between 1766 and 1772. The three sonatas by Jean-Louis are the whole of his second opus.