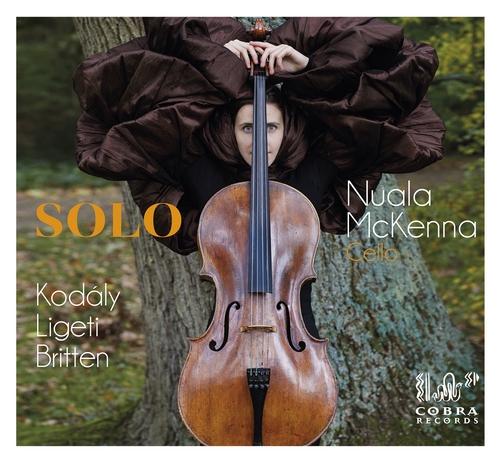 Zoltan Kodaly:
Sonata Op. 8 in B minor for solo cello

Benjamin Britten:
Cello Suite No. 1, Op. 72
Throughout the years Nuala McKenna has developed a deep love for the cello solo repertoire which has taught her many things about herself. This debut album is a culmination of the process of connecting with that music. For this album she has chosen three works which share one great attribute: expression to the limit!

Zoltán Kodály played the violin, viola and piano, but his favorite instrument was undoubtedly the cello, thus he created one of the major works of the cello repertoire; Sonata in B minor for solo cello. He requires the performer to transcend his technical skills. It’s a tribute to Hungarian folk music and conjures contrasts of wide Hungarian landscapes as well as dancing in a rural pub.

György Ligeti’s music extends the compositional style to which his fellow Hungarian composers were confined, also experimenting with electronic music which one can feel in Sonata for solo cello.

Benjamin Britten’s Cello Suite No. 1 is the first of three which were a result of the friendship between him and the cellist Mstislav Rostropovich. Britten tells a spellbinding story filled with sometimes strange and perplexing sounds, with obvious influences from Spanish guitar music, Indian music and English church music.

The German-Irish cellist Nuala McKenna (*1993) was accepted a pre-student at the Musikhochschule Lübeck in 2005. From 2011-2014 she studied at the Hochschule für Musik Freiburg and continued her studies in the class of Prof. Ivan Monighetti in Basel. Currently she is enrolled in the Soloists Program at the Musikhochschule Stuttgart. Since 2012 Nuala is a member and also solo cellist of the Balthasar- Neumann-Ensemble led by Thomas Hengelbrock. In the season 2013/14 she played as an academist in the Royal Concertgebouw Orchestra in Amsterdam and afterwards completed a two-year academy in the Deutsche Kammerphilharmonie Bremen. In March 2019 she has taken up her new position as solocellist in the Deutsche Kammerphilharmonie Bremen.

Nuala has performed concerts with renowned artists such as Maria Joao Pires, the Talich Quartet, Boris Garlitsky, Augustin Dumay, Miguel da Silva, Olli Mustonen, Axel Strauss and Jean- Guihen Queyras and has performed as a soloist with among others the Göttinger Sinfonieorchester and Kammerorchester Kiel. She is artistic leader of her own festival ‘Musikfest Kahleby’ which was founded in summer 2016.
Recording: Koepelkerk, Renswoude, the Netherlands, 14, 15 & 17 April 2020. Nuala McKenna is currently playing a cello with the label 'Joseph Guarnerius, 2nd half 18th century'.