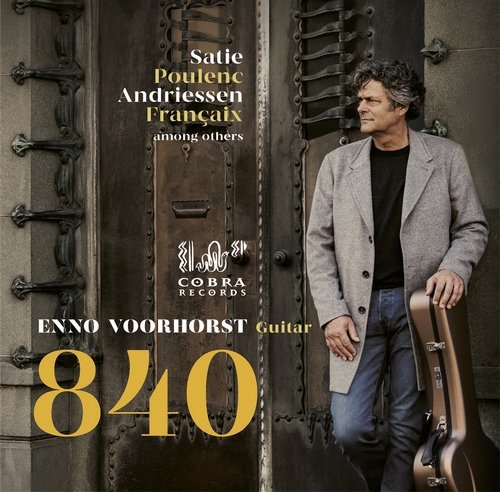 John Cage:
4'33''
The number 840 appears above the score of Satie’s Vexations. It indicates the amount of repeats of this piece with a length of only one minute and a half. Now it suddenly takes not less than 16 hours to perform it. This is a good example of the innovative and sometimes absurd genius of Erik Satie. Some early reviewers called him a charlatan, but according to Stravinsky Erik Satie was one of the great composers of his days besides Bizet and Chabrier. Debussy arranged two Gymnopédies for orchestra successfully, whilst Roussel praised his impeccable counterpoint and John Cage pronounced Satie the ‘indispensable’ and ‘art’s most serious servant’. Erik Satie (1866-1925) was a man who raised opinions.

On this CD all tracks are somehow related to the music by Erik Satie; five of them are arrangements of his piano works which are combined with pieces that carry the idea’s of Satie. The influence of Satie on French music is not to be underestimated and he can be seen as a navigator towards new musical developments. He liked to be ironical, absurd and funny and for his whole life he had a deeply rooted dislike of conventions in all its forms. It made him a forerunner in the field of many musical innovations, the most typical and daring one being his harmonic language with its remarkable resolutions and parallel chords. Also pop musicians feel connected to this new invented approach to harmony. The repertoire of this album reaches from 1884 with the very first composition of Satie, until 2019 with Acruarela nr.7 of Camilo Giraldo dedicated to Enno Voorhorst.