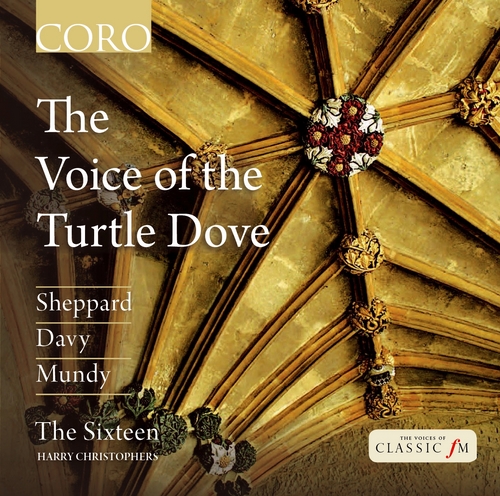 Sheppard / Mundy / Davy: The Voice of the Turtle Dove

The Sixteen returns to its grass roots and revisits the golden age of Renaissance polyphony in England for the repertoire of its latest disc. In this new programme the award-winning ensemble presents a stunning selection of music by Richard Davy, John Sheppard and William Mundy.

Little is known about the life of Richard Davy. He is, however, the second most represented of all the composers in the Eton Choirbook and wrote in the beautifully florid style so characteristic of 1490s English music. The mere fact that his music survived the Reformation is nothing short of a miracle. He was a scholar of Magdalen College, Oxford, where he acted as choir master and organist and it is believed that he wrote the monumental O Domine caeli terraeque creator in the span of a single day during his time at the college.

John Sheppard's musical style contains all the grandness and idiosyncrasies of English harmonic invention, as is aptly displayed on this new recording which includes one of the gems of Tudor music - the glorious seven-part Trinity antiphons Libera nos with their ethereal combination of upper voices balanced with an even-note cantus firmus in the bass, as well as one of the most grandiose of Sheppard’s responsories, Gaude, gaude, gaude Maria, a magnificent setting of the responsory and prosa for Second Vespers for the Feast of the Purification.

William Mundy was one of the few composers whose career bridged the Reformation and allowed him to develop his style through a variety of important periods. His Votive antiphon, Vox patris caelestis, probably written for the Feast of the Assumption of the Blessed Virgin Mary in the reign of Mary Tudor, can be considered as the culmination of the great antiphon tradition with its elaborate and virtuosic vocal writing and daunting extended range.