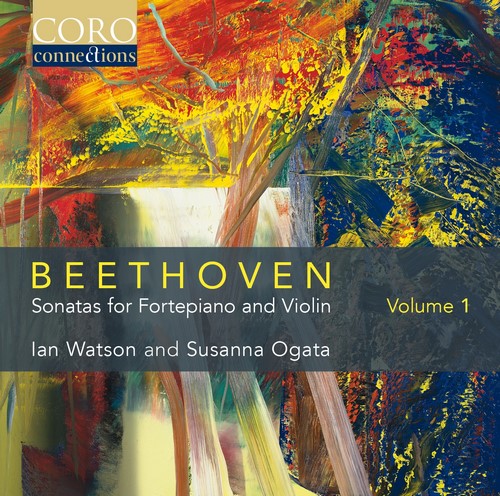 Sonata No.4 in A minor, Op. 23
Sonata No.9 in A major, Op. 47 – ‘Kreutzer’
Susanna Ogata and Ian Watson join forces to record the complete Sonatas for Fortepiano and Violin of Ludwig van Beethoven in four instalments. The first CD features Beethoven's Fourth Sonata, Op. 23 in A minor, as well as the revolutionary ‘Kreutzer’ Sonata, his ninth, Op. 47 in A major – a blazing landmark in violin virtuosity and classical music repertoire. Beethoven’s music and persona pushed the existing forms and instruments to their absolute limit. Using period instruments for which the music was originally written, Watson and Ogata reveal not only the clarity of Beethoven’s extraordinary musical structure, but also an amazing palette of colours. In doing so, this duo aims to recreate the white-hot intensity of the moment these striking sonatas were written and first performed. Susanna Ogata has been praised for her ‘totally convincing, spontaneous and free-flowing playing’ (The Berkshire Review) and is a tenured member of the Handel and Haydn Society where she was appointed as Assistant Concertmaster of the orchestra in 2014. Ian Watson has been described by the Frankfurter Allgemeine Zeitung as ‘a conductor of formidable ability’, and by The Times in London as a keyboard performer with ‘virtuosic panache and brilliantly articulated playing’ and ‘a world-class soloist.’ He was appointed Resident Conductor of Boston’s Handel and Haydn Society in September 2014.