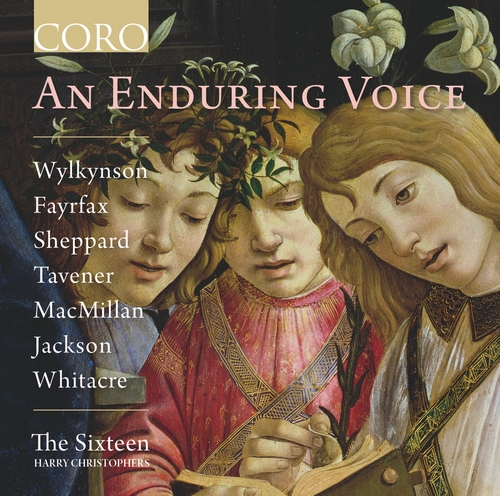 James Macmillan:
O Virgo prudentissima
The Sixteen has long been hailed for its championing of Tudor music, especially that of the Eton Choirbook, as well as for choral treasures of 20th century and its work with 21st-century composers. And so to mark its 40th year the group has return to its grass roots in an album that celebrates those passions.

An Enduring Voice brings together some of the most glorious music from the past and present. It contrasts a new commission by award-winning composer Sir James MacMillan with music from the 15th and 16th centuries by Fayrfax, Wylkynson and Sheppard. These fine examples of English polyphony are juxtaposed with stunning music by Tavener, Gabriel Jackson and Eric Whitacre.

In 2019 The Sixteen’s Choral Pilgrimage tour entitled ‘An Enduring Voice’ featuring all of the music from this album will visit 27 towns and cities across the UK including London, Oxford, Cambridge, York, Manchester, Cardiff and Edinburgh.
Recorded at Church of St Augustine’s, Kilburn, London, 12-14 November 2018