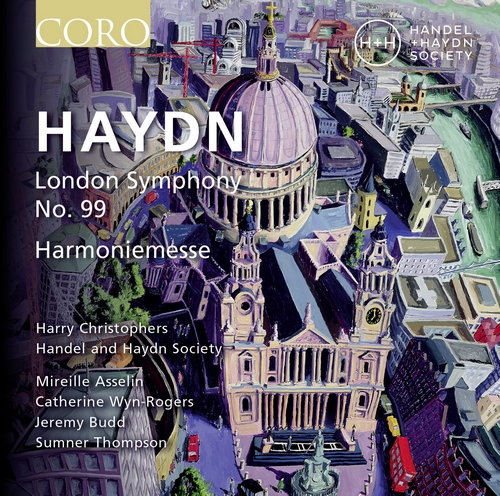 ‘London’ Symphony No. 99 in E-flat major, Hob.I:99
Mass in B-flat major ‘Harmoniemesse’, Hob.XXII:14
The Handel and Haydn Society continues its acclaimed Haydn exploration on CORO with one of the composer's last major works - the dramatic and sumptuous Mass in B-flat major more commonly known as the ‘Harmoniemesse’ because of its use of a full wind band. It is accompanied on this album by the Symphony No. 99 in E-flat major - one of Haydn’s twelve ‘London’ symphonies composed between 1791 and 1795 when London was the indisputable musical capital of Europe.

Handel and Haydn Society is America's oldest continuously operating arts organisation. Harry Christophers has been Artistic Director since 2008 during which time the Society has released 12 recordings on CORO including Haydn’s Creation, all six of his ‘Paris’ Symphonies, Mozart’s Requiem and Handel’s Messiah, and a Christmas album - ‘Joy to the World’ - celebrating America’s favourite festive tunes.
Recorded live at Symphony Hall, Boston, USA, 25 & 27 January 2019