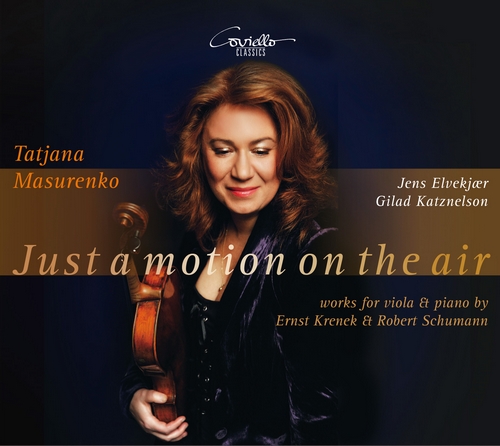 Krenek / Schumann: Just a motion on the air

Robert Schumann:
Adagio und Allegro, As-Dur, A flat Major, Op. 70
Frauenliebe und -leben from A Woman‘s Love and Life, Op. 42
Fairy tale pictures - Four pieces for pianoforte and viola Op. 113
Nr. 9 „Mit Myrten und Rosen“ from Liederkreis (song cycle), Op. 24
Nr. 10 "Stille Tränen“ from 12 poems, Op. 35
Nr. 1 „Widmung“ from Myrthen, Op. 25
„The idea of making a CD featuring music by Krenek and Schumann had been on my mind for a long time. In 2012, I was able to discuss my concept with Gladys Krenek in Palm Springs. We remained in regular contact over the next few years to develop the concept for this album. Gladys Krenek gave her full support for the project which has always been very close to my heart.“ (Tatjana Masurenko)

On her latest CD, Tatjana Masurenko presents her comparison between Schumann‘s and Krenek‘s works. Both composers have had similar interest in music and literature and to both of them music was some kind of therapy.
Recording: BR, Studio 2, 11th–14th June 2015 (Krenek), Schloss Dornreichenbach 14th-16th June 2016 (Schumann)