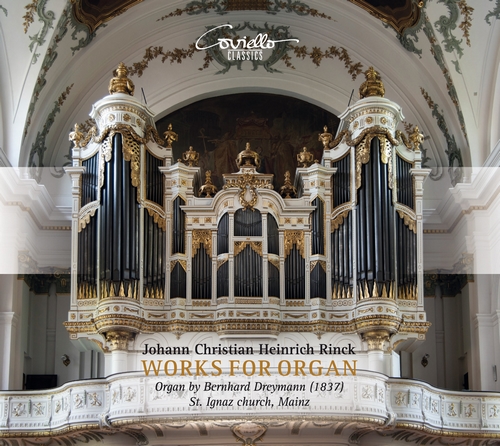 CD 2:
Organ Concerto in F major
Chorale and variations on „Jesu meine Freude”, Op. 127
Postludium in G major from Op. 55
Adagio in E minor, Op. 57/4
Postludium in A major (Con moto), Op. 48/11
Adagio in G major, Op. 57/2
Nine variations and finale, Op. 90 (Fugue arranged by Hans-Jürgen Kaiser)
Like Ludwig van Beethoven, Johann Christian Heinrich Rinck (1770-1846) also celebrated his 250th birthday in 2020. As a composer, organ virtuoso, author of an organ school and expert in the service of Grand Duke Ludwig I of Hesse-Darmstadt, he was one of the outstanding figures in the history of church music in the 19th century. Professor Gerhard Gnann and his students play selected works by the composer on the Dreymann organ in St. Ignaz Church in Mainz, built in 1837. At the transition from late classical to romanticism, they bring out the fine nuances of the timbres of the organ, which was restored from the ground up in 2015-2018.
Recording: Parish of St. Ignaz, Mainz, May 2020. Students play the Bernhard Dreymann organ (1837) in Pharish of St. Ignaz, Mainz.