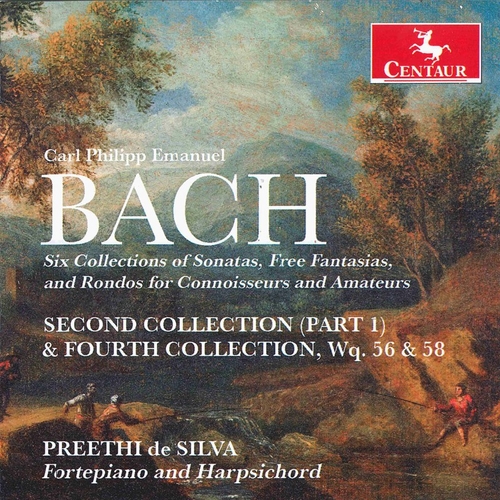 Centaur - CRC 3288
Kompozytor
Carl Philipp Emanuel Bach (1714-1788)
Wykonawcy
Preethi de Silva, fortepiano
Sonata III in A Jajor
Rondo II in D Major
Rondo III in A Minor
Rondo I in A Major
Sonata II in E Minor
Sonata I in G Major
Fantasia in E flat Major
Rondo III in B-flat Major
Rondo II in E Major
Fantasia in A Major
Preethi de Silva, fortepiano and harpsichord
This, the second CD I’ve heard of C. P. E. Bach’s music played by Preethi de Silva, is just as interesting and well played as the first. She has a fine grasp of the music’s quirky, irregular rhythms and dynamics changes, all of which she is able to bring out on her Anton Walter fortepiano. Having now heard so much of C. P. E. Bach’s music for both harpsichord and fortepiano, I’m starting to wonder if the composer himself noted the difference in dynamic response between the two instruments. Even in his day the fortepiano, though much weaker than the pianos of Beethoven’s day and beyond, had a somewhat richer sound and better gradation of dynamics than contemporary harpsichords, and in listening carefully to a large number of his compositions for both instruments, I think he knew which pieces sounded better on which instrument. In other words, I don’t think they’re interchangeable. If you play C. P. E. Bach, you need to have both instruments at hand in order to do the music full justice. She is playful, serious, coy, energetic, and lyrical in turn whatever the music demands, she provides. This particular album includes sonatas, rondos, and fantasias from the massive collections of Keyboard Sonatas and Free Fantasias, along with Rondos, for Connoisseurs and Amateurs which were recorded complete by Pieter-Jan Belder on Brilliant Classics, and their approach is similar, although I liked the more sparkling sonics of the latter a bit better. Nevertheless, if you did not already have that excellent set of records you would certainly not go wrong with de Silva’s CD. As I say, she brings out all the invention, wit, and humor of these works with a wonderful touch and fine imagination. A good record.