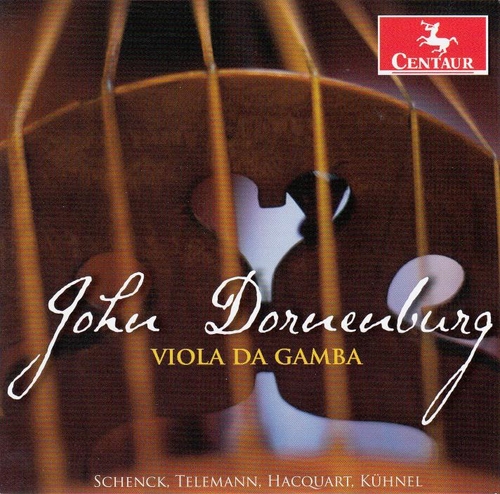 Carolus Haxquart:
Suite in A Minor

Schenck:
Sonata V
The music for unaccompanied viola da gamba has a richness of sonority that is unlike any other. The program on this recording is book-ended by two sonatas of Johannes Schenck, whose published music for viola da gamba represents a high point in the development of German/Dutch viol music and technique around 1700. These remarkable solo pieces are found in his Opus 9 collection entitled L’Echo du Danube, c. 1704. They are full of fantasy, cover a pitch range of more than three octaves, and deliver an avalanche of multiple stops. August Kühnel was a German viol player and composer whose reputation as a performer was widespread in his lifetime. The Partita XII is found in his sole publication of 1698, a set of 14 sonatas and partitas for the viol. Telemann’s Sonata for Viola da Gamba senza Cembalo survives as his only composition for the unaccompanied viol. Compared to the other music on this CD, the pleasing tunefulness, balanced phrases , and diatonic harmonies give it an unmistakable galant style. Carolus Hacquart was born in Bruges, Belgium, and moved to Amsterdam sometime in the early 1670s. His music for viol has the full chordal content and quasi-polyphonic construction found in the music of Schenck, with a particularly lovely set of variations in the Sarabande.