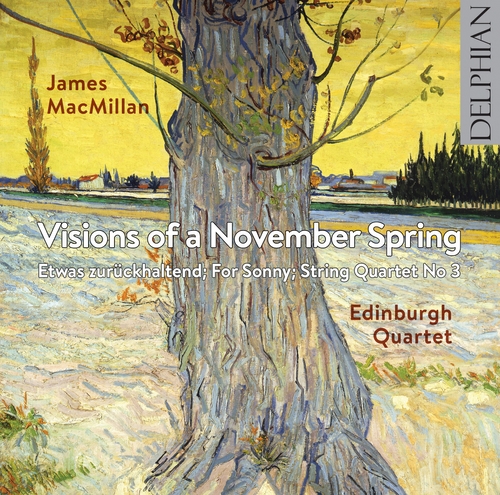 Macmillan: Visions of a November Spring

Etwas Zuruckhaltend
For Sonny
String Quartet Nr 3
‘For fifty years the Edinburgh Quartet has been one of the leading chamber ensembles of the UK,’ wrote the quartet’s patron James MacMillan on the occasion of their fiftieth anniversary in 2010. ‘I feel proud to be associated with them as they enter their second half-century under the dynamic leadership of Tristan Gurney, providing some of the most exciting performances in the business.’

Exciting is certainly the word to describe these marvellously idiomatic, intensely virtuosic readings of MacMillan’s own music. Spanning his career from 1982 to 2011, they provide three snapshots of his evolving style: an intriguing tissue of Wagnerian referentiality; a burst of youthful energy with touches of the visionary; and the sovereign integration of folk and discursive elements in String Quartet No 3. A moving short tribute, For Sonny, shows another side to this ceaselessly inventive composer’s output.

The Edinburgh Quartet was founded in 1960 and quickly became established as one of Britain’s foremost chamber ensembles. It achieved international recognition after winning the Contemporary Prize at the Evian-les-Bains String Quartet Competition and has since toured extensively across Europe, the Far East, North and South America and the Middle East, as well as appearing regularly at venues across the UK. The Quartet has always been a champion of new music and has worked with many important and prolific composers of our age including James MacMillan, Michael Tippett and Howard Blake.

'A SPLENDID COLLECTION... FULL OF UNDERSTANDING, AND ENTHUSIASM, FOR THE COMPOSER.'

‘DEDICATED PERFORMANCES BY THE EDINBURGH QUARTET …