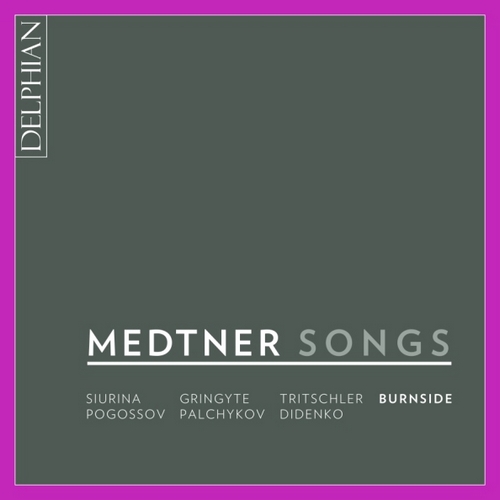 CD 2:
3 songs from Six Poems, Op. 32
5 songs from Six Poems after Pushkin, Op. 36
3 songs from Five Poems, Op. 37
3 songs from Four Poems, Op. 45
3 songs from Seven Poems, Op. 46
2 songs from Seven Songs on Poems by Pushkin, Op. 52
4 songs from Eight Songs, Op. 61
Following the rapturous reception given to his complete Rachmaninov: Songs on Delphian, pianist Iain Burnside set out to bring together six regular collaborators in a survey of songs by Nikolai Medtner. Born into a family that was both prosperous and well read, Medtner was deeply immersed in the heady intellectualism of the era. More than any other genre, his songs exemplify his dual German/Russian heritage, manifest in his devotion to both Goethe and Pushkin. Musically, too, there are paradoxes, with the self-proclaimed defiant conservative’s work shot through with moments of striking modernity. Pianistically, he was a giant – the writing makes Herculean demands of the player – yet he is often most eloquent when simplest. From an output of over 100 songs, Burnside has selected just over fifty, carefully matching them to his chosen singers to reveal a compositional voice that is itself unique.