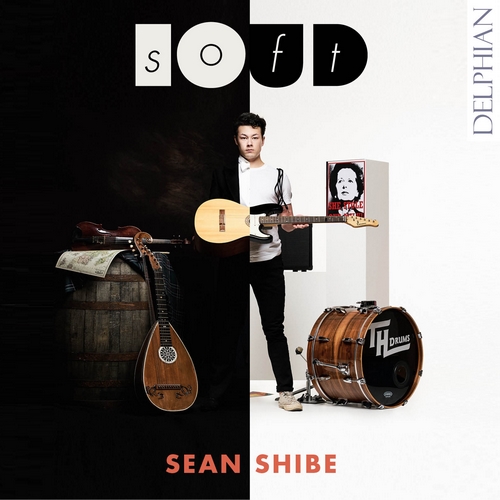 James MacMillan:
From Galloway
Motet I (from Since it was the day of Preparation …)

David Lang:
Killer
Shortlisted in both ‘Instrumentalist’ and ‘Young Artist’ categories at the prestigious Royal Philharmonic Society Awards, Sean Shibe makes his second outing on Delphian with a programme of radical contrasts that showcases virtuosity at both extremes. Where his debut album Dreams & Fancies paid homage to the guitar repertoire created by his great predecessor Julian Bream, softLOUD looks ambitiously forward, with a mix of electric and acoustic, early and modern, whose contradictions and challenges speak to our own times.

The gentle beauty of Scottish lute manuscripts and of two short instrumental solos by James MacMillan is confronted by, and holds its own against, music by New York-based composers Julia Wolfe – a work of cathartic grief and anger originally scored for nine bagpipes – and David Lang, whose electric violin work Killer is iron-clad in its abrupt fury. Shibe has arranged all of this music himself, and presents it here alongside a breathtaking recording of Steve Reich’s now classic Electric Counterpoint. ‘Have we today forgotten how to speak with grace,’ Shibe asks, ‘or is the real danger that we aren’t screaming loudly enough?’
Recording dates: 15 January 2018