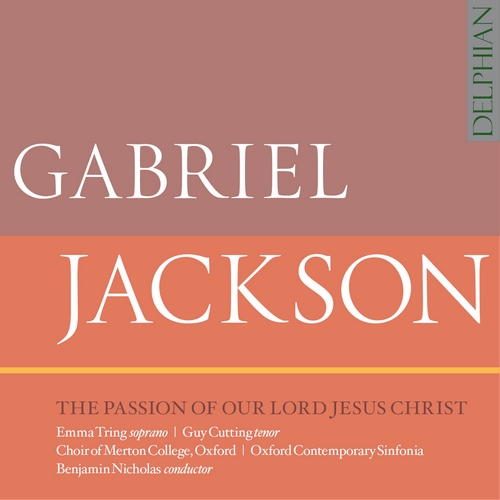 Jackson: The Passion of our Lord Jesus Christ

Palm Sunday
Anointing at Bethany
Last Supper and Footwashing
Gethsemane
Caiaphas, Peter and Pilate
Crucifixion
The End and the Beginning
Strikingly colored and richly imaginative, Gabriel Jackson’s re-telling of the age-old story of Christ’s betrayal and crucifixion interweaves biblical narrative, English poetry and Latin hymns, culminating in a rare setting of poetry by T.S. Eliot – himself an alumnus of Merton College, Oxford, which commissioned the present work as part of its extensive Merton Choirbook project. Shorter items from the Choirbook have featured on previous Delphian releases by the choir; now, The Passion of our Lord Jesus Christ is revealed as one of the project’s crowning glories. Under the direction of longtime Jackson collaborator Benjamin Nicholas, and with soloists and instrumentalists hand-picked by the composer, it receives here a performance to match the work’s own harrowing drama and dark ecstasy.
Recording: Chapel of Merton College, Oxford, 24-27 June 2018