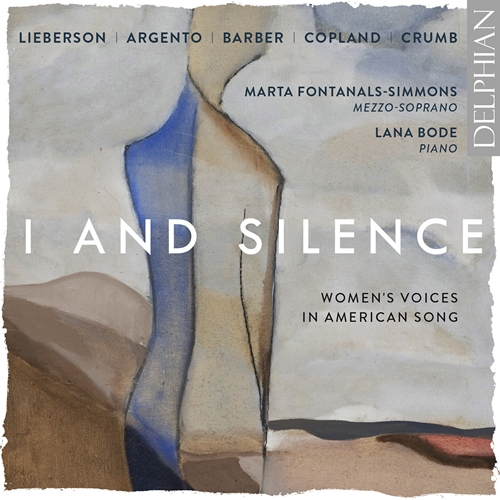 Aaron Copland:
Twelve Poems of Emily Dickinson:
Why do they shut me out of Heaven?
The world feels dusty
I felt a funeral in my brain

George Crumb:
Three Early Songs - Let it be forgotten
‘Did I sing too loud?’ asked Emily Dickinson in 1861, in a poem set a century later by Aaron Copland.

The expectations of silence often placed on women, historically and politically, and music’s power to break through them, are the themes of this deeply personal recital by mezzo-soprano Marta Fontanals- Simmons and pianist Lana Bode.

Their programme reflects and channels the voices of female writers and musicians: Dickinson herself, Sara Teasdale and Virginia Woolf are among those whose words are set in the works brought together here, two of which – Dominick Argento’s From the Diary of Virginia Woolf and Peter Lieberson’s Rilke Songs – were written for great mezzosopranos of the recent past, Dame Janet Baker and Lorraine Hunt Lieberson.
Recorded on 26-29 January 2017 in the Britten Studio, Snape Maltings. Piano: Steinway D grand, serial no 579072.