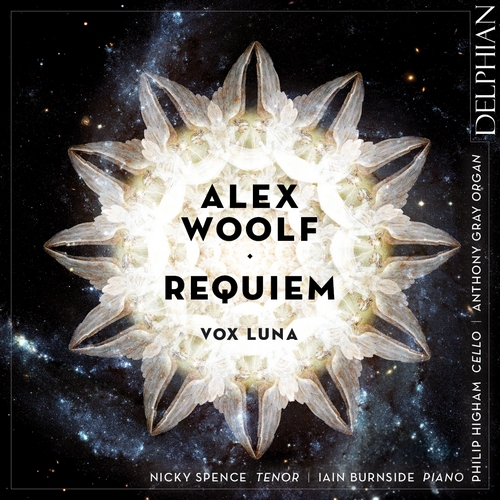 Introit
Kyrie
The Fall
Offertory
Sanctus
A Crowd of Cares
Agnus Dei
The Year’s Midnight
Pie Jesu
In Paradisum
A major statement by a composer still in his mid-twenties, Alex Woolf’s Requiem, composed in 2018, combines powerful expressive immediacy with an impressive ability to synthesise the diverse traditions that have grown up around the requiem genre in the past two hundred years, as it has moved from the church into the concert hall.

As in Britten’s War Requiem, the traditional Latin texts are brought into dialogue with modern-day poetry – here, three poems by the Welsh writer Gillian Clarke (who was National Poet of Wales from 2008 to 2016). Initially these exist in the separate sound-world of a solo tenor and piano, with a solo cello creating the bridge to the liturgical sphere of choir and organ. Yet ultimately, Clarke’s very human concerns focus and inect Woolf’s approach to the religious texts, conrming the work’s trajectory from despair into consolation.

Nicky Spence, fresh from his triumph at the 2020 BBC Music Magazine Awards, is the solo tenor, joined by Delphian artists Iain Burnside and Philip Higham; and Woolf conducts his own choir Vox Luna in this strikingly personal work.
Recorded on 24-26 November 2019 at St John the Evangelist, Upper Norwoo