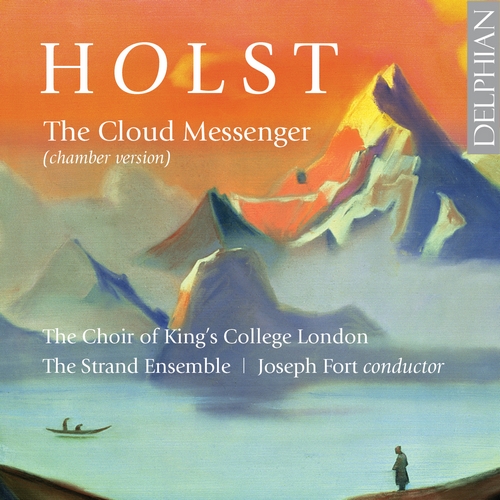 The Cloud Messenger, Op.30, H.111 (chamber version arr. Jospeh Fort)
Five Partsongs, Op. 12
In 1910, after seven years of work, Gustav Holst completed his choral-orchestral masterpiece,The Cloud Messenger. But following a disappointing premiere in 1913 the piece fell into obscurity, and has received only a handful of performances.

This crowning glory from the composer’s Sanskrit period deserves to be much better known. Telling the powerful ?fth-century story of an exiled yaksha who spies a passing cloud and sends upon it a message of love to his distant wife in the Himalayas, it is rich in its harmonic language and ingenious in its motivic construction, and points the way to Holst’s next major work,The Planets. This colourful chamber version by conductor Joseph Fort lends the more tender passages a new intimacy and clarity, while retaining much of the force of the original and laying the ground for a new life in performance.

A set of ?ve part songs, completed the year The Cloud Messenger was begun, shows the newly married Holst similarly absorbed by love’s trials and rewards.
Recorded on 9-11 June 2019 at All Hallows' Gospel Oak.