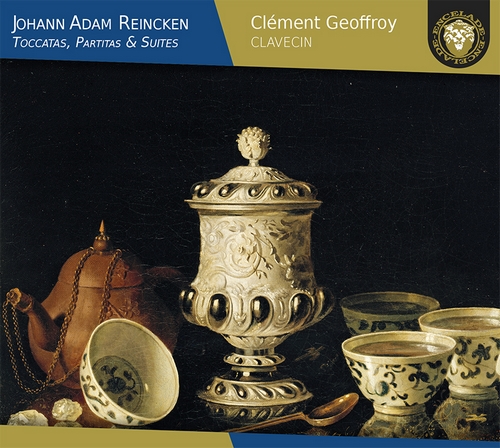 Toccata in A Major
Ballett, Partite diverse
Suite in A Minor
Toccata in G Minor
Fugue in G Minor
Praeludium in C Major
Suite in C Major
Holländische Nachtigahl
Die Meierin. Partite diverse
As far as we can tell, Johann Adam Reincken was probably born in Deventer in the Netherlands sometime between 1630 and 1640. He began studying music with the town’s organist and then in 1654 he left to complete his education with the great Scheidemann in Hamburg, becoming the latter’s assistant in 1657 and succeeding him on his death in 1663, after which his popularity increased to the point where he was famous throughout Northern Europe Drawing on his fortune, which he appears to have amassed by means that had nothing to do with music, along with the help of two jurists and town senators, he founded Hamburg’s Opera House in 1678 - the first establishment of the kind in Germany - and ran it until 1685. He then devoted the rest of his life to his work as an organist, composer and teacher, up until his death in 1722.

In spite of his longevity, he left only us a very small body of work. Apart from his Hortus Musicus, published in 1687 - and the six sonatas of which it is made up are one of the jewels in the genre’s crown - Reincken does not appear to have felt the need to have his compositions set down for posterity although, fortunately for us, a few handwritten copies have survived. The finest of them are certainly those collected by Johann Christoph Bach (1671-1721) in the Möller and Andreas Bach Buch manuscripts.

The body of work we have today includes twelve pieces for the harpsichord and only three for the organ - a fairly meagre return, given that he spent sixty years playing those instruments every day. Although - together with the six sonatas for two violins, viol and basso continuo from the Hortus Musicus - this is all that we have, the high quality of these pieces, both from the point of view of the composition and in terms of the skill required to perform them, show how talented Reincken was and why his reputation was justified. Among the works which make up this record, I have chosen to retain a number whose authenticity has not yet been verified because, even if they are not actually his work (and we may never know), they are still fine pieces and belong to the musical circles in which he moved.