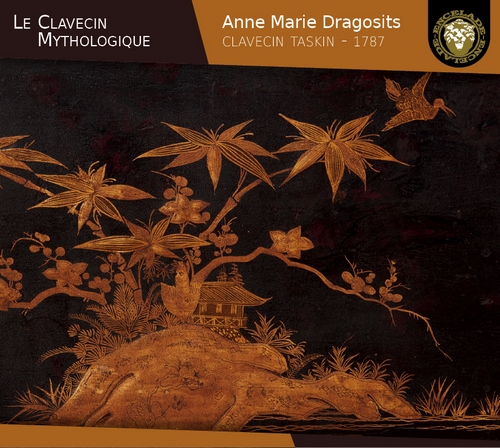 Jacques Duphly:
Médée
Les Grâces
The mythological world of antiquity has fascinated us for millennia without pause, and its densely woven tales of gods, goddesses, legendary creatures and mortals continues to entreat us to this day. It is ultimately for the reader to decide whether these myths provide explanations for the incomprehensible, offer allegories of our human experience, or are simply just fascinating tales. This recording gathers baroque program music together in which each work recounts a tale from the world of mythology.

The broad sonic spectrum able to be elicited from the marvelous harpsichord made by Pascal Taskin is commen-surate with the varied abundance of mythological creations depicted in this program’s collection. Form, musical structure and narrative style are also multifaceted herein, from works that best seem to resemble landscape portraits to dramatic opera scenes in miniature.

The range of composers included begins nearly at the inception of French harpsichord artistry and ends near its swansong: from d’Anglebert’s arrangements of Jean-Baptiste Lully’s compositions (the latter is credited with having “discovered” French baroque music), to towering harpsichord greats such as François Couperin and Jean-Philippe Rameau, further still with the singer, opera composer and keyboard virtuoso Pancrace Royer, and ending with Jacques Duphly. The latter’s music represents a final culmination before the abrupt break made by the French Revolution; indeed, Duphly’s death on the day after the storming of the Bastille tragically emblem-izes the loss of significance of the harpsichord, which would become recognized as a symbol of the Ancien Regime.

[…] With their special sound characteristics, historical instruments can approach an almost mystical, even mythical aura. The Taskin harpsichord in Hamburg is an unbelievably colorful and beautifully sounding example; it is in every regard a unique instrument that I found richly rewarding as a player. When deciding to record upon such an instrument, one accepts small technical or mechanical imperfections as a precondition.