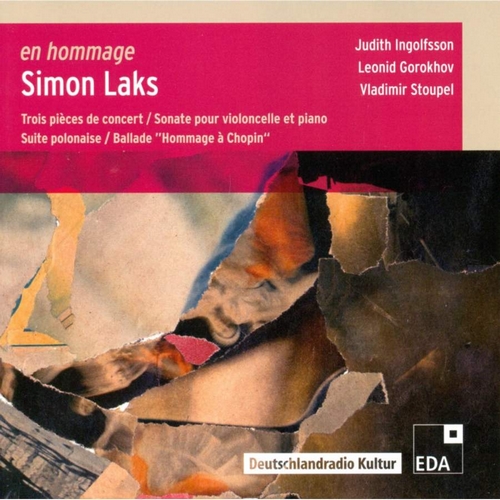 Eda - EDA 31
Kompozytor
Szymon Laks (1901-1983)
Wykonawcy
Vladimir Stoupel, piano
Judith Ingolfsson, violin
Leonid Gorokhov, cello
3 Pieces de concert
Cello Sonata
Suite polonaise
Ballade 'Hommage a Chopin'
Born in 1901 in Warsaw, Laks belonged to a group of Polish musicians and composers who banded together in Paris in the late 1920s as the Association des Jeunes Musiciens Polonais. Under the stewardship of Paderewski, Szymanowski, Arthur Rubinstein and Nadia Boulanger, it was considered the most important non-French music association in what was then the music capital of the world. Laks, who had studied at the University of Warsaw and the Conservatoire in Paris, began his auspicious career as a composer in the early 1930s. He composed for famous ensembles such as the Roth Quartet and renowned soloists such as Maurice Maréchal and Vlado Perlemuter. Laks’s Jewish background led to his internment in 1941 and deportation to Auschwitz-Birkenau, where he led one of the camp’s orchestras – and narrowly survived the Shoah “after an endless series of wonders.”

This CD presents a collection of world-premiere recordings of Laks’s works from the pre-war era that marked his break through into the French music scene. It also includes his ballad, 'Hommage a Chopin', which he composed in 1949, commissioned by the Chopin competition in Warsaw, to commemorate the 100th anniversary of the great composer’s death. These recordings present a composer who succeeded in creating a highly original synthesis of Slavic and French elements of style.