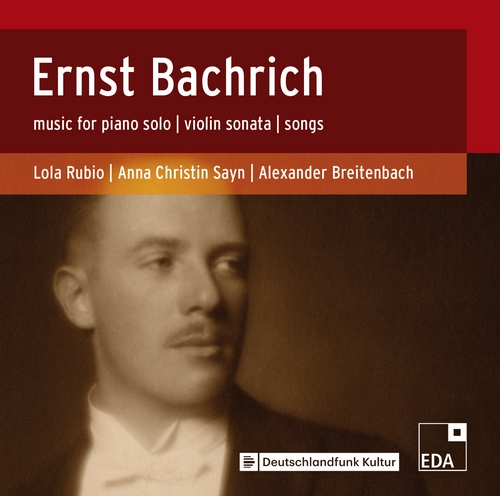 Ernst Bachrich (1892-1942) was a pupil and close collaborator of Arnold Schoenberg in Vienna. As a founding member of Schoenberg’s Society for Private Musical Performances, pianist and composer, he was one of the most important protagonists of the Second Viennese School. After working as a Kapellmeister in Düsseldorf and Duisburg, he returned to Vienna, where he attempted to make a stand against the increasing repressions after the Anschluss. He was deported In May 1942 and murdered in July of the same year in the Majdanek extermination camp.

The present production is the first ever presentation of Bachrich's works on record/CD. It came into being in partnership with Deutschlandfunk Kultur and the EchoSpore project, which the Cologne College of Music launched in 2018 to rediscover and publish works by persecuted composers.

Following first recordings of works by Roberto Gerhard, Viktor Ullmann and Józef Koffler, eda records presents with Ernst Bachrich another composer from the Schoenberg School who was protected from epigonism by a strong artistic personality, who at the beginning of the 20th century endeavoured to synthesize various tendencies of the avant-garde from a Central-European perspective.
Recordings: Piano sonata, Prelude, Three Portraits: 2 and 3 July 2018, Jesus-Christus-Kirche, Berlin Dahlem; Violin sonata, songs: 13–16 August 2019, Jesus-Christus-Kirche Berlin Dahlem. Violin by French, Charles Brugeres from 1886.