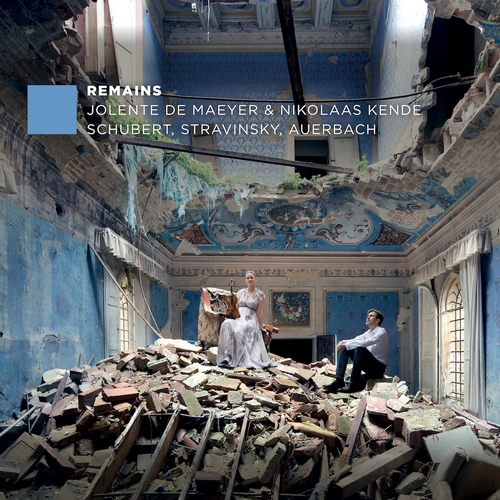 Franz Schubert:
Fantasy in C major, D 934 (Op. posth. 159)
Remains is the second album by Jolente De Maeyer and Nikolaas Kende, after Kreutzer Sonata (2016). It is a reflection on how the remains of the past inspire and influence our fast-changing world.

Both Stravinsky and Auerbach faced the difficulties of their time and society and chose to seek a future in a different world by deciding to leave their homeland, Russia. Stravinsky first became a French citizen in 1934 and, after fleeing the upcoming war in Europe to settle in America, an American citizen in 1939. Auerbach was still in her teens when she was one of the last artists to defect from the Soviet Union during a concert tour in America in 1991.

Although both composers found a unique, personal and visionary style in their compositions, often inspired by modern times and their new surroundings, one can hear how much inspiration they found in music from the past and in their Russian background. They were acclaimed for their style everywhere; Stravinsky became one of the most important composers of the 20th century and Auerbach is celebrated as one of the leading composers of the 21st century.

How different, by contrast, was Schubert's life. He never abandoned his city of birth, Vienna, and only received the acclaim he deserved after his death. He too dreamed of a better world, but was only to reach that place in his music. He built on the Viennese musical tradition and developed a unique style of composing, but his compositions were largely misunderstood during his short life. Schubert composed his Fantasy in the last year of his life, a year full of despair and rejection. One of the key elements of Schubert's Fantasy is a love song he had written earlier called Sei mir gegrüsst, based on a poem by Friedrich Rückert.

He must have identified with the bittersweet lyrics of the song, which have a thread of loneliness and abandonment. But whereas the song remains unclear if a positive ending is possible, the Fantasy itself ends in a triumphant style. Despite all the misfortune and misunderstanding that befell Schubert, a hope for a utopian world remained with him to the end. The music of all three composers inspires us to dream of other worlds, fantasy worlds with remains of the past. So do Henk Van Rensbergen's photographs of abandoned places.