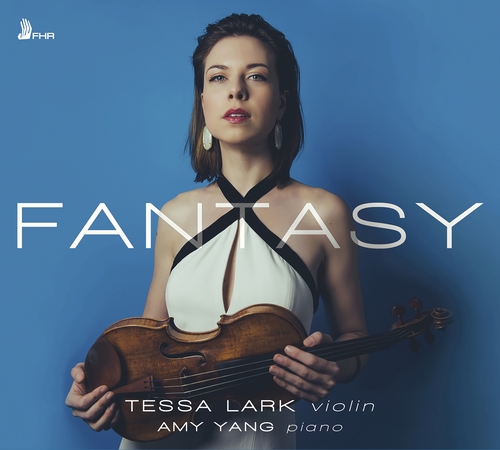 American violinist Tessa Lark has chosen a selection of some of her most cherished Fantasies and Rhapsodies for violin for her début solo album ‘Fantasy’.

Conjuring up a world of make believe and freedom, the musical form of Fantasy (Fantasia, Fantasie, Fantaisie, Phantasie, Phantasy, Fancy – call it what you will) has been with us for centuries, way before the earliest work in Tessa Lark’s recital, although she brings us right up-to-date with the form with her own Appalachian Fantasy from 2016. From Telemann to Lark we cover four centuries of fantasies, with four geographical stop-offs: Hamburg, Vienna, 1500 miles (2400 kms) of eastern North America and Hungary (courtesy of its gypsy traditions) by way of Paris.

A budding superstar in the classical realm, multi-award winning violinist Tessa Lark has been consistently praised by critics and audiences for her astounding range of sounds, technical agility, and musical elegance.

Silver Medalist in the 2014 International Violin Competition of Indianapolis, recipient of a 2018 Borletti-Buitoni Trust Fellowship and a 2016 Avery Fisher Career Grant, and winner of the 2012 Naumburg International Violin Competition, Tessa is also a highly acclaimed fiddler in the tradition of her native Kentucky, delighting audiences with programming that includes Appalachian and bluegrass music and inspiring composers to write for her.
Tessa Lark plays a ca. 1600 G.P. Maggini violin on loan from an anonymous donor through the Stradivari Society of Chicago.