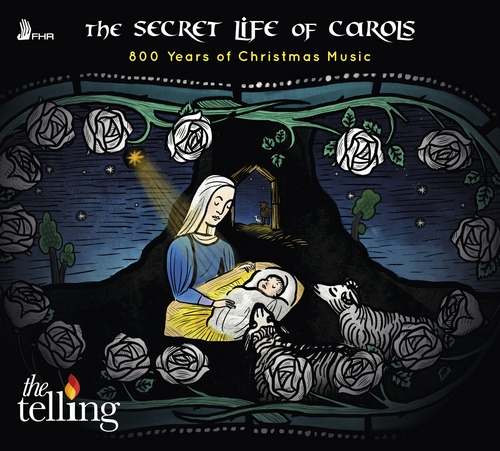 The Secret Life of Carols - 800 Years of Christmas Music

In the Middle Ages the term “carol” didn’t have the same meaning as today. It was merely an indication of the form of the piece which would start and end with a chorus (named a burden) and would be interspersed with verses which told the story. The word carol is derived from the Old French word carole, a circle dance accompanied by singers.

Several medieval carols including The Coventry Carol and Ther is No Rose (included on The Telling’s first album [FHR68]) are also still sung in modern arrangements at Christmas carol concerts and church services across the country. And indeed these early English carols are very much “for the people”.

The programme on this album includes a selection of traditional carols from across Europe. Many, like the Burgundian carol Patapan, have roots going back centuries, some as far back as the Middle Ages. There is also a personal dimension to the choice of carols, drawing on three of the roots fo the performers on the album ie Finnish, German and Irish roots (Kaisa Pulkkinen, Ariane Prüssner and Jean Kelly respectively) to include several carols which are not well known in the UK.
Recorded at St Mary Magdalene, Sherborne, UK, 4-8 August 2019.