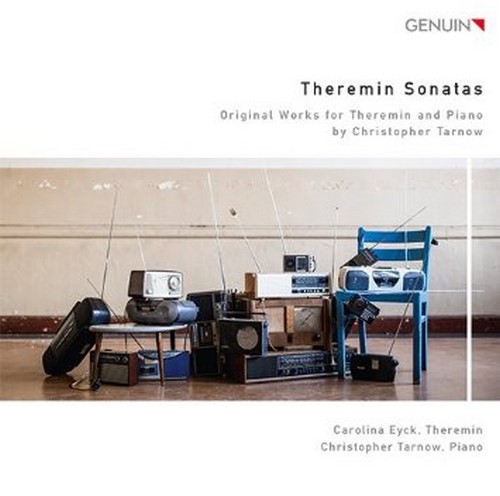 A mysterious instrument, ethereal sounds, explosive music and a virtuoso player of the highest order: Carolina Eyck is one of the few internationally acclaimed theremin players. For her instrument, the Leipzig composer and pianist Christopher Tarnow composed two sonatas that he and Ms. Eyck, who enjoy a productive artistic friendship in the city of Leipzig where they both reside, recorded together for their debut CD on the Genuin label. Carolina Eyck is the developer of a new playing technique, using a new and technically more advanced instrument that she obtained in 2006. Greater precision in playing possibilities resulting from this technical development allowed for the discovery of previously unknown realms of sound. This performance technique she introduced in her textbook, The Art of Playing the Theremin.

Carolina Eyck and Christopher Tarnow are one of the world's few chamber music ensembles for theremin and piano, performing together since 2013. They played at the "Festival Mitte Europa", the "Festival for Contemporary Music" of the Elbphilharmonie Hamburg and at a concert series called "Odd Harmonics" in New York City, among others. In 2014 they will release a CD with improvisations under the independent label Butterscotch Records, New York. One of their main concerns is the expansion of the classical repertoire for their instruments. Their first step was to compose and to perform the world's first sonata for theremin and piano (Christopher Tarnow - Sonata for Theremin and Piano, 2013), laying the foundation for their future endeavours.

Christopher Tarnow (*1984 in Frankfurt, Germany). Tonmeister studies at Hochschule für Musik Detmold. Pianistic training with Matthias Petersen and Nerine Barrett. Since 2008 Tonmeister for the classical record label 'Genuin' in Leipzig. Productions, live recordings, and broadcasts for different record labels and radio stations in Germany and Europe (amongst others with Adrian Brendel, Kit Armstrong, Johannes Martin Kränzle and Staatskapelle Halle). Sound engineer for film and computer game productions, for instance for ZDF, RTL and Microsoft, amongst others with Weimarer Staatskapelle and Prag Filmharmonic. From 2010 to 2013 composition studies at Hochschule für Musik und Theater Leipzig with Reinhard Pfundt. Nomination in the category "Producer of the Year" at the Icelandic Music Awards 2012 for a CD production of Schubert's Winterreise with Vikingur Olafsson and Kristinn Sigmundsson in Reykjavik.