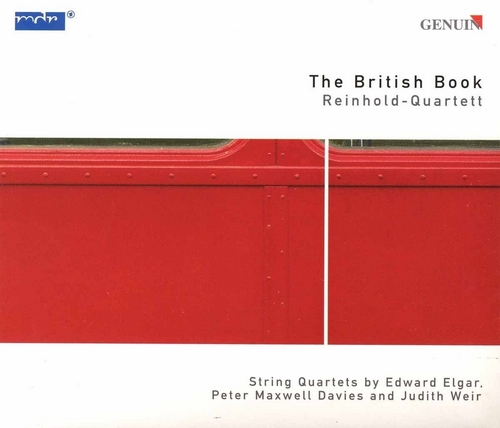 Genuin - GEN 86065
Kompozytor
Judith Weir
Edward Elgar (1857-1934)
Peter Maxwell Davies (1934-2016)
Wykonawcy
Reinhold-Quartett
Dietrich Reinhold, violin
Tobias Haupt, violin
Norbert Tunze, viola
Christoph Vietz, cello
Judith Weir (*1954):
String Quartet (1990)
Serene
Con moto
Presto
Edward Elgar (1857-1934):
String Quartet in E minor. op. 83
Allegro moderato
Piacevole (Poco andante)
Allegro molto
Peter Maxwell Davies (*1934):
Little Quartet No. 1
Andante
Allegro
Lento
Peter Maxwell Davies (*1934):
Little Quartet No. 2
Adagio - Allegro mod. - Adagio
For strings only; Ever since Purcell, it seems like the British have traditionally composed "for" their musicians and not compose "against" them. One only needs to think of John Dowland's songs, the free-flowing melodies of Edward Elgar or the unique personal style of Benjamin Britten-all these composers give listeners the feeling of being drawn into an intimate dialog. This tradition lives on today within New Music. Completed between 1977 and 1990, the works of Judith Weir and Peter Maxwell Davies featured on the new Genuin release inspire a warm, glowing timbre from the Reinhold Quartet whose performance is marked by an immediacy that is palpable to the listener. Edward Elgar's quartet from a good 70 years before, composed during the 'late autumn' of the Romantic period, is very much in keeping with the other works recorded on this CD. In short, this is music for musicians, music for listeners. This is music 'For Strings Only'-O happy tradition! "Their warm, sensitive playing makes it obvious how well they understand the British composers and with what intelligence they know how to interpret their works."Pizzicato 12/06
data wydania: 21-07-2006