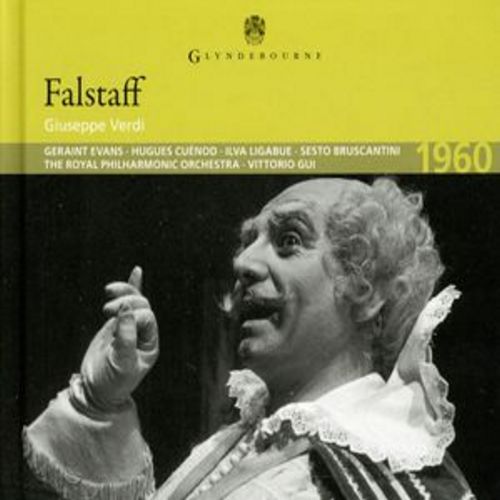 Glyndebourne’s association with Falstaff commenced in 1955 for a production staged at the Edinburgh Festival, directed by Carl Ebert, designed by Osbert Lancaster and conducted by the great Carlo Maria Giulini.

Falstaff quickly proved to be a favourite and enjoyed 5 revivals in quick succession. This recording comes from Glyndebourne Festivals’ 1960 season, conducted by Vittorio Gui, in what was Geraint Evan’s third outing as Falstaff. Evans sung in the 1957 and 1958 Glyndebourne restagings, in a role that was to go on and have a role in defining him as a singer, performing Falstaff in numerous productions including Covent Garden and the Metropolitan Opera, and on record under Georg Solti.

On this recording, Geraint Evans is joined by Sesto Bruscantini as Ford, Juan Oncina as Fenton, Ilva Ligabue as Alice Ford, a role she is most remembered for having recorded it twice: under Geroge Solti and Leonard Bernstein, this (new/archive) recording predating both these.

The remaining classic cast member is the Swiss tenor Hugues Cuénod as Dr Caius, his glorious sense of the roles’ comedy beautifully portrayed here. Hugues Cuénod passed away in December 2010 at the age of 108, having a career that spanned 66 years. He was something of an institution at Glyndebourne, walking the Glyndebourne stage for over 30 years and involved in some 470 performances. At the age of 82 he appeared in Glyndebourne’s production of Le nozze di Figaro and in 1990, at the age of 87, was offered the role of Monsieur Taupe in Capriccio, a role he had sung previously at Glyndebourne, but declined.