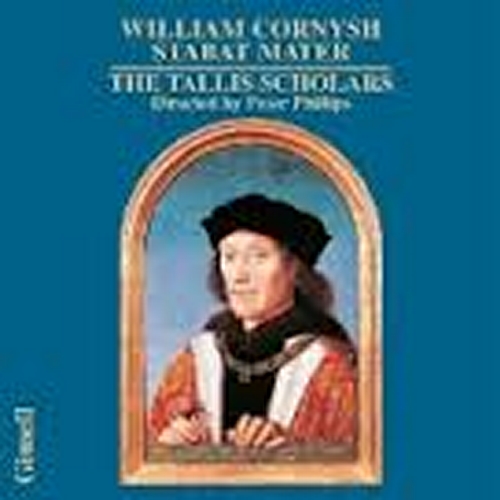 The only album dedicated to the extra-ordinary music of William Cornysh. A man of remarkable intelligence, he was well-known in his lifetime not only as an outstanding musician, but also as a poet, dramatist and actor.

William Cornysh (d.1523) lived at a crucial moment in the development of English music. On the one hand he contributed to the last and most florid style to be found in the Eton Choirbook; and on the other he must have realised that this style could go no further, beginning to simplify his music and thus setting a technique for the future. There is therefore considerable variety in his small output and this recording, which contains all the sacred music by him which may be reconstructed and a selection of his secular compositions, reflects it: from the unparalleled complexities of the last phrases of the Magnificat to the naive directness of Ah, Robin.

Cornysh was an early and rare example of what is now called the Renaissance artist. A man of remarkable intelligence, he was well-known in his lifetime not only as an outstanding musician, but also as a poet, dramatist and actor. Unfortunately none of his dramatic writings has survived, though there is a poem by him in the British Library entitled A Treatise bitwene Trouth and Enformacion which was written while serving a jail sentence in the Fleet prison. In this he claimed that he had been convicted by false information and thus wrongfully accused, though it is not known exactly what the accusation was. As an actor he took part in many plays at court, some of which have survived, including The Golden Arbour (1511) and the Triumph of Love and Beauty (1514). But it was within the activities of the court masque that he would have had the ideal opportunity to show off his many talents. In 1501 he is reported as having devised the pageants and 'disguysings' for the marriage festivities of Arthur, Prince of Wales and Katherine of Aragon. More importantly, in June 1520 he led the Chapel Royal's ceremonies at the Field of the Cloth of Gold, which included not only singing but a full-scale pageant. In 1522 the Emperor Charles V visited England to negotiate with Henry VIII and on June 15 the court was entertained with a play by Cornysh which outlined in simple allegory the progress of the discussions and their expected outcome.

As a musician Cornysh had the most prestigious employment at court - as Master of the Children of the Chapel Royal - which he fulfilled from 1509 until his death in 1523. Part of his job was to train the choristers, and it is probable that he was responsible for the very high standard of singing in the Chapel Royal choir which so amazed the French in the early years of the 16th century. In September 1513 Cornysh took the choir to France, giving performances in the area around Lille, and there survive several descriptions of how impressive these performances were. Their reception was almost certainly caused by the combination of the high treble voice and the technically very intricate style of English compositions of that time. Nothing would have shown this off better than Cornysh's own Salve regina or Magnificat, though he might equally have performed the music of John Browne, Robert Fayrfax or any of the other composers represented in the Eton Choirbook.

Several of his larger-scale sacred pieces are now lost, including several settings of the Mass. Those that remain are all in the Eton Choirbook except the Magnificat, which is in the Caius Choirbook. Even within these sacred pieces there is evidence that Cornysh wished to find a solution to the stylistic cul-de-sac with which his most complicated music presented him. By contrast with the fearsome ornaments and unusually wide overall compass of the Magnificat (three octaves and a fifth), a piece like the Ave Maria seems quite straightforward, being scored only for men's voices and with the melodic lines being more genuinely linear. The Gaude virgo mater Christi is in a similar style to this, while the Salve regina belongs to the florid repertoire. The Stabat mater is a masterpiece which contains frequent contrasts between ornate and simpler passages: these juxtapositions are something of a speciality of Cornysh's. That this setting is less well-known might be because the opening sections survive incomplete, though these have been magnificently reconstructed by Professor Frank Harrison. In general Cornysh's style is less introverted than that of his greatest contemporary John Browne. Cornysh always seemed to be striving for the most brilliant effect, or the most pathetic tone, a way of thinking which would have made him perfectly suited to the madrigal a hundred years later, and makes him reminiscent of Thomas Weelkes.

His secular compositions are mostly late examples of the medieval carol, with verses and a repeating burden. Ah, Robin follows this form, though Cornysh made it more sophisticated by writing a repeating bass. We interpret the text as a dialogue. Woefully arrayed has three verses with a burden, which is shortened between the verses but is given in full at the beginning and end. Adieu, my heartes lust and Adieu, corage may be fragments (perhaps burdens) or carols of which the verses are lost, or were never written down. All these English-texted pieces give an impression of the deeply reflective nature of much of the courtly secular music of Henry VIII's time.