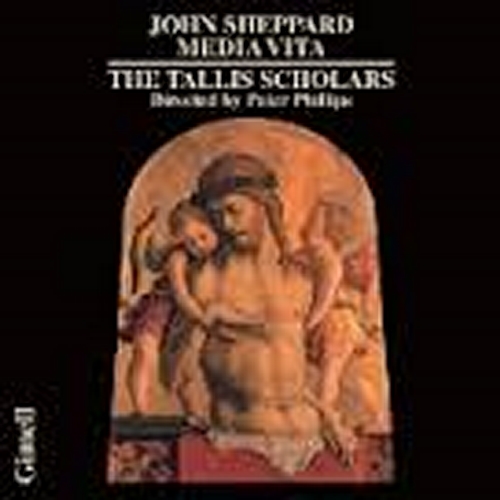 The first recording of John Sheppard's masterpiece Media vita. It begins with some of the most haunting words in any of the Offices; in the midst of life we are in death. Lasting over 21 minutes it is a unique and absorbing achievement.

John Sheppard's reputation as a composer is still not fully established. Part of the reason has certainly been the lack of reliable editions of his music, when his contemporaries Taverner, Tallis, Tye, White and others have been promoted from the first decades of this century; but even now, with some recordings and many publications devoted especially to him, progress has been slow. We hope that with this first recording of his masterpiece Media vita, all doubts about his stature will be fully dispelled.

Various mischances concerning Sheppard's life and work have hindered understanding of what he achieved. It is always unfortunate when there are no firm dates of birth and death for a composer, since it is then impossible to have anniversary celebrations for him. Also, little is known about Sheppard's career, except that he was employed at Magdalen College, Oxford between 1543 and 1548 and also at the Chapel Royal from 1552 or before to 1559 or 1560 when his name disappeared from the list of Gentlemen. It is assumed that this disappearance was as a result of his death; but since he arguably made an important contribution to Anglican music after Queen Elizabeth's accession in 1558, a later date of death would certainly be a possibility.

Much of Sheppard's music has survived incomplete. In general it has been the tenor part which has been lost, as is the case with Verbum caro, Reges Tharsis and Media vita on this recording. Normally this is not a serious problem, since he often based his compositions on plainchant tenors (one of the last composers in Europe consistently to do so) and these can be provided from other sources. But there are passages in Media vita where the tenor is 'free', necessitating recomposition (in this case by David Wulstan) before it can be performed. Just occasionally the absence of a part has posed such severe editorial problems that it has been found impossible to make an effective version of the music: Sheppard's only surviving votive antiphon, Gaude Virgo Christiphera, is in this category.

Sheppard's most important music was composed specifically for the Salisbury rite, either as hymns, responds or Mass settings. His style is immediately recognisable, since much of his writing was for the same six-part choir of treble, mean, two countertenors, tenor and bass, which he deployed to achieve the maximum sonority. He used the treble voice with unusual flair (in, for instance, the gimell at the words 'qui cognoscis' in Media vita or the last chord of Verbum caro) and some of his harmonies were also exceptionally daring by the standards of the time. His use of the false relation could be as direct and harsh as that of any composer - In manus tuas II and III provide good examples of this - dissonances inspired by sheer pleasure in their sound rather than by any especially suggestive passage in the text.

All the music included on this disc is based on chant. Verbum caro and Reges Tharsis are responds for Matins on Christmas Day and Epiphany respectively, and the In manus tuas settings (from Compline on Passion Sunday to Wednesday in Easter Week) also have a respond structure. All three of these are founded on the same chant melody, though in the first Sheppard chose a more elaborate scheme than in the others by setting a larger section of the chant in polyphony, including the opening words, and by writing imitative counterpoint. Christe Redemptor omnium and Sacris solemniis are hymns from Lauds on All Saints Day and Vespers at Corpus Christi respectively, each with a sequence of verses which alternate chant and polyphony. Hymn settings were customarily intimate and restricted compositions, with the chant in the top part (as Christe Redemptor omnium shows), so it is all the more suprising to find so elaborate and splendid a composition as Sacris solemniis in this genre, with its divided trebles and means, giving eight parts in all. Sheppard also showed unusual sophistication in this work by disguising the chant and breaking it up between the higher voices and the lower ones, which at times form antiphonal choirs.

Media vita is a unique achievement, in its length, expressive power and liturgical function. The text consists of the antiphon to the Nunc dimittis at Compline on the major feast-days in the two weeks before Passion Sunday. The Nunc dimittis itself is the only part of the text to be sung to chant alone, while the antiphon text, which for days of this importance contained a verse and respond structure within itself, is set in polyphony complete. The first two verses are for men's voices, the third for two trebles, two means and bass, and each is followed by all or part of the response 'Sancte Deus, Sancte fortis, Sancte et misericors Salvator'. The composition begins with some of the most haunting words in any of the Offices: 'Media vita in morte sumus' (in the midst of life we are in death). It was in setting these words that Sheppard conceived one of the greatest passages in all Tudor polyphony.