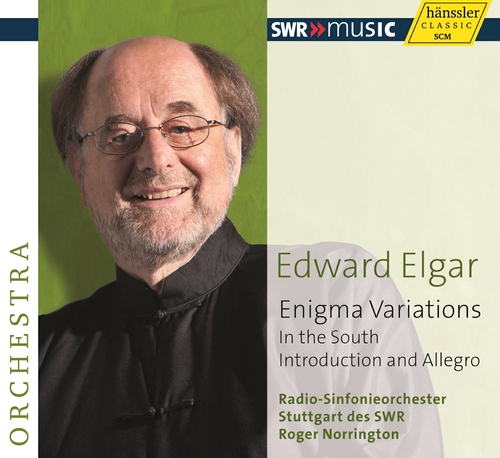 SWR Music - H 93191
Kompozytor
Edward Elgar (1857-1934)
Wykonawcy
Radio Sinfonieorchester Stuttgart des SWR / Roger Norrington
In the South (Alassio) Concert Overture opo. 50
Introduction and Allegro for Strings Quartet and String Orchestra op 47
Enigma Variations - Variations on an Oryginal Theme op. 36
Edward Elgar's masterly Enigma Variations are undoubtedly his most famous work of and is also the first major piece he composed. The Enigma Variations brought him international recognition and brought England back on the musical map. Elgar composed the variations in 1899. In the 13 variations and finale the composer characterizes some of his friends, identified only by their initials - so to the public, this was initially a mystery, an "enigma" as to who it was. But Elgar also spoke about a “well-known tune” which he hid in his composition, which to this date has gone undiscovered – so indeed, there is a second “enigma” as well.

In spite of whatever puzzle the composer may have intended, the work of highly effective, well structured, well orchestrated, colorful, and compelling. The symphonic study "Falstaff", rarely performed these days, was written in 1913,shortly before the outbreak of World War II. The theme is of course, Shakespeare’s Falstaff, as he appeared in "Henry IV" and his sad progress from boon companion of Prince Hal, to his lonely exile, remembering when he a heard the “chimes at midnight.”