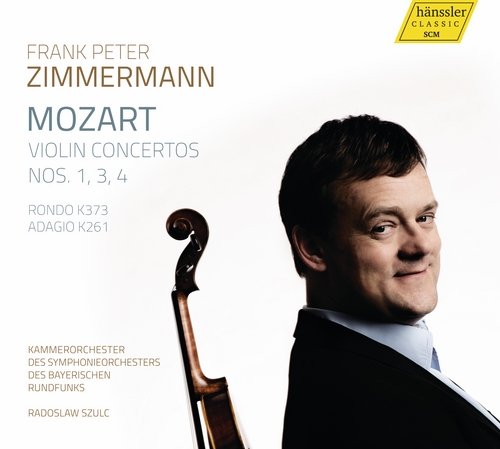 Violin Concerto No.1 B-Dur
Violin Concerto No.3 G-DurViolin Concerto No.4 D-Dur
Rondo C-Dur KV 373
Adagio E-Dur KV 261
Today when Frank Peter Zimmermann says that Mozart has always been easy for him, he needs only call to mind his debut concert at the age of ten - when he played Mozart's G major Concerto K. 216; or when, some 30 years ago, as a fresh 20-year-old, the same FPZ made his first recording of the five concertos for EMI; and then if one factors in that over the years that each of these Mozart works has passed through his hands nearly 300 times in concert, then one can begin to appreciate the intense physical and spiritual experience that Frank Peter Zimmermann brings to these new recordings.

One will immediately hear on this CD the experience that a master can bring to these works, because no one else plays these works with the same incredible, almost balletic, weightless elegance and rich tone, reaching a degree of intimacy, without any obstacle between the performer and the listener, as does Frank Peter Zimmermann. Mozart's every wish is perfectly fulfilled! The Chamber Orchestra of the Symphony Orchestra of the Bavarian broadcasting company serves both masters admirably.

Frank Peter Zimmermann's Mozart edition will be released on 3 CDs; the second CD will be released in February, 2016 and will include the Sinfonia concertante (with Antoine Tamestit), the Violin Concerto No. 2 D Major K. 211, the Rondo in B-flat Major KV 269 as well as the Haffner Serenade K. 250 in which the violin plays a big role. The third CD is planned for February, 2017 and will contain the Concertone for two violins, the Violin Concerto No. 5 and the Kassation K. 63.