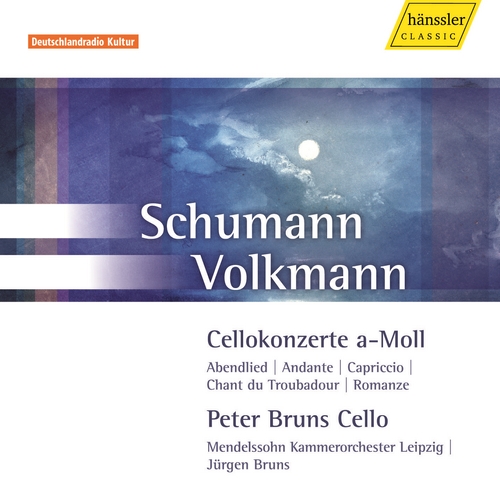 composed for the cello, was written in 1854, late in the composer’s life.

Exactly when the first performance took place is unknown, but the

popularity of the work continues unabated to this day, and it is one of

the most beautiful cello concertos ever. In the following year, Robert

Volkmann composed his own Cello Concerto, sharing with Schumann’s

work not only a common key tonality, but also sharing with it a deep

expressiveness and drama. Robert Volkmann was one of the most

century and his music forms a stylistic bridge from Schumann to

Brahms. Volkmann enjoyed success as a composer from the early

1850s, rising to international recognition during the following decade,

but owing to the comparative musical isolation of his adopted country,

Hungary, he always remained in the shadows of Brahms and

Schumann. His Cello Concerto is technically very demanding, his

melodic imagination, his poetry and his subtle humor helped the work to

achieve great popularity during his lifetime. Sadly, following the

composer’s death, much of his music disappeared from the world’s

concert halls, and is only now being re-discovered and championed by