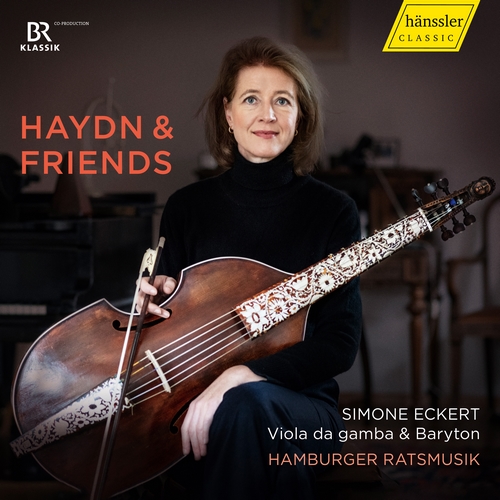 Carl Stamitz:
Quartetto D-Dur (Ms. Schwerin)
Sextetto Es-Dur (Ms. Schwerin)
This recording contains works by Joseph Haydn, Carl Stamitz and Franz Xaver Hammer. The viola da gamba had already passed its zenith by the mid-18th century, but contemporaries continued to appreciate its qualities. Recommended was an accompaniment by high-tuned violin, two horns and bassoon. The only three surviving compositions for this combination (by Stamitz and Hammer) have been found in a music library in the North of Germany and have been recorded on this CD for the first time

Prince Nicolaus of Esterházy demanded in 1765 of his court music director Joseph Haydn more compositions for the Baryton. This instrument posseses six bowed strings in viola- da-gamba tuning (D-G-c-e-a-d) which were reinforced and refined by sympathetic strings of metal, which were mounted on the back of the instrument and could themselves be plucked. Until 1778 Haydn wrote over 170 works for baryton, most of them 126 trios, scored for baryton, viola and cello.

??n 1990 Simone Eckert revived the more than 500 old tradition of the Hamburger Ratsmusik. Since than she is working as a gambist, artistic director, concert agent and manager of her ensemble, as a musicologist and editor of newly discovered music for viola da gamba and as a music teacher in and around Hamburg, and appears in concerts at festivals in Germany, many European countries, the USA, Japan and China.
Recording: 20. – 22. Februar 2019, Refektorium Heilsbronn, ambitus Musikproduktion